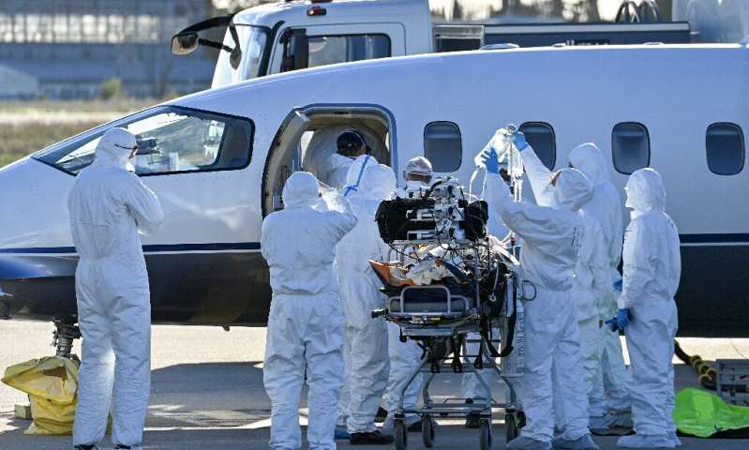 People in France and Germany were bracing Wednesday for tough new curbs on their daily lives as Europe struggled to contain an alarming surge in coronavirus cases.

More than 500,000 new infections were reported worldwide on Tuesday in a new daily record, according to an AFP tally.

The deepening gloom across Europe and other parts of the world contrasted with the jubilation in Australia’s second city of Melbourne where champagne corks popped to celebrate the end of a months-long lockdown.

The pandemic has unleashed devastation across the global economy since emerging in China at the end of 2019.

And in the absence of a vaccine or effective treatment, countries are being forced to impose widely unpopular Covid-19 restrictions that have sparked violent clashes in Italy. Much of the United States — the worst-hit nation — is also bracing for a tough winter, and the pandemic is dominating the campaign for next week’s election.

In Europe, the main stock markets tumbled as investors fretted over tighter measures expected to be imposed in the EU’s leading economies. Daily cases of Covid-19 in France have topped 50,000, while Germany is regularly reporting 10,000 new infections.

French President Emmanuel Macron is to address the nation on Wednesday evening to present new measures that a government official said were likely to be “unpopular”, as doctors warn that many hospitals are days away from being overrun. French media reported that Macron had become convinced of the need for a nationwide four-week lockdown.

Other options said to be considered included extending curfew hours already imposed on 46 million people, possibly with a full lockdown at weekends, or targeted stay-at-home orders for hardest-hit regions. German Chancellor Angela Merkel is also expected to push for drastic new curbs in crisis talks with regional leaders Wednesday. The proposed restrictions to come in force from November 4 to the end of the month would limit contact outdoors to people from two households, according to a draft document seen by AFP. Schools, daycare centres and shops will remain open, but bars, cafes, restaurants would shut.

In Belgium, which has the most cases per capita in the world, the number of coronavirus hospital admissions all but matched the level in the first wave in the spring, public health institute showed. The government will meet again on Friday, and Prime Minister Alexander de Croo could announce more stringent measures.

Medics in one hospital in Belgium are so overstretched that some staff who are themselves infected with Covid are continuing to treat patients. But in in many countries, the new restrictions are likely to test the resolve and patience of weary populations. Anger has already boiled over in Spain and Italy, where thousands have protested in recent days against anti-coronavirus curbs. Some of the rallies have turned violent, particularly in Milan and Turin on Monday night when angry youths threw petrol bombs and stones at police cars and smashed up shop fronts.

But there was exhilaration and relief Down Under on Wednesday as Melbourne’s five million people were able to return to shops and restaurants after months at home.

It was, however, far from a return to business as usual. Shopper Lesley Kind, 71, said many smaller outlets in Melbourne’s city centre had yet to reopen or appeared permanently closed.

Across the world, the coronavirus has infected more than 44 million people, with close to 1.2 million deaths.

After the US, India is the most infected nation on the planet, with nearly eight million cases.

After imposing a strict lockdown in March, it has loosened restrictions to revive its battered economy.

On Wednesday, millions of Indians turned out to vote in state polls in Bihar — the world’s biggest election since the coronavirus emerged, with 70 million eligible voters.

Booths were packed and many ignored government advice on wearing masks and social distancing.

“I am a little afraid because corona is not a small disease,” said Nidhi Kumari, a 21-year-old student.

As the race to find a treatment or cure gathered pace, pharma giant Pfizer voiced measured optimism Tuesday about the prospect of a vaccine becoming available this year.

For its part, the European Union said it had earmarked 100 million euros for quicker tests for the virus.