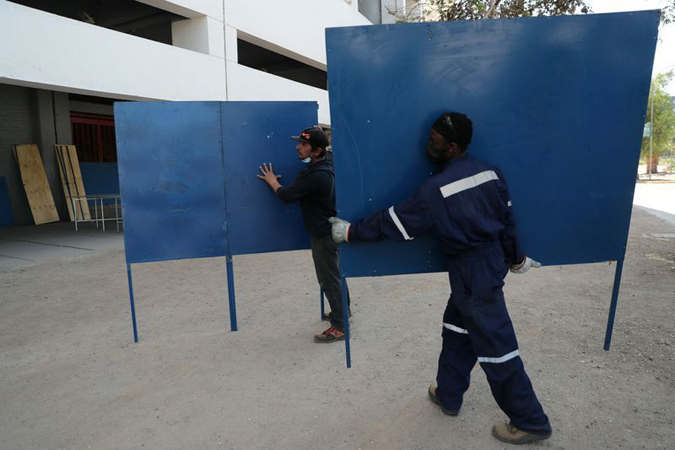 Chileans will go to the polls on Sunday to vote on whether they want to swap a constitution written during the Pinochet dictatorship with a new document written by a specially elected citizens’ body.

Opinion polls suggest a resounding win for the ‘Approve’ campaign for a new magna carta, with around two thirds of the vote.

A new constitution was a key demand of demonstrators engaged in sometimes violent mass social protests that broke out in October last year over inequality and elitism. A cross-party referendum deal emerged from the protests in December.

Those opposed to a new constitution argue it will be a “leap into the void” to change a document that has helped make Chile one of the region’s most stable free market economies.

Those in favor of replacing the existing text say it has given too much privilege to private interests, and segments access to health, education and pensions by income.

In Santiago cafes, on public transport, and in a series of rallies by the ‘Approve’ and ‘Reject’ camps, the debate has been intense.

Juan Riquelme Varela, 66, a postal worker, said Chileans had never before had much say in the drafting of their charter. “This is a historic time Chilean workers and all its citizens are living through,” he said.

Alejandro Werner, the Western Hemisphere director for the International Monetary Fund, said on Thursday the process could herald “a new era for Chile” if the country could maintain the economic growth which has made it a regional darling, while promoting a fiscally responsible social inclusion agenda.

Cristobal Bellolio, a political commentator who favors a new text, said it would ensure the “nation’s fingerprints,” rather than those of a small elite, were on its rulebook.

The concern, he added, was that some might expect a new draft to turn Chile into a benevolent welfare state overnight.

“I get the feeling there are many people thinking of the constitution as a government program,” he said.

Chileans famously voted to end the 17-year dictatorship of Augusto Pinochet in a 1988 plebiscite.

The current constitution was drafted by Pinochet’s close adviser Jaime Guzman in 1980 and has been tweaked by successive governments to reduce military and executive power.

On Sunday, voters will choose whether to approve or reject the drafting of a new constitution. They will also be asked if a fresh text – to be voted on in a second referendum – should be drafted by a constitutional convention of specially elected citizens or a mixed convention including lawmakers.

A recent spike in violent protests and nervousness about large public gatherings amid the coronavirus could dampen turnout. All Chileans are automatically registered to vote, but participation is voluntary.

Stringent security and sanitary measures have been rolled out in 2,715 polling stations across the nation of 18 million.

“This plebiscite is the way for Chileans to resolve our differences, cement our ties, determine our democratic path and above all condemn violence,” he said.