An event was organized by the Ministry of Foreign Affairs, in collaboration with the Office of the UN Resident Coordinator, to celebrate the 75th anniversary of the United Nations. 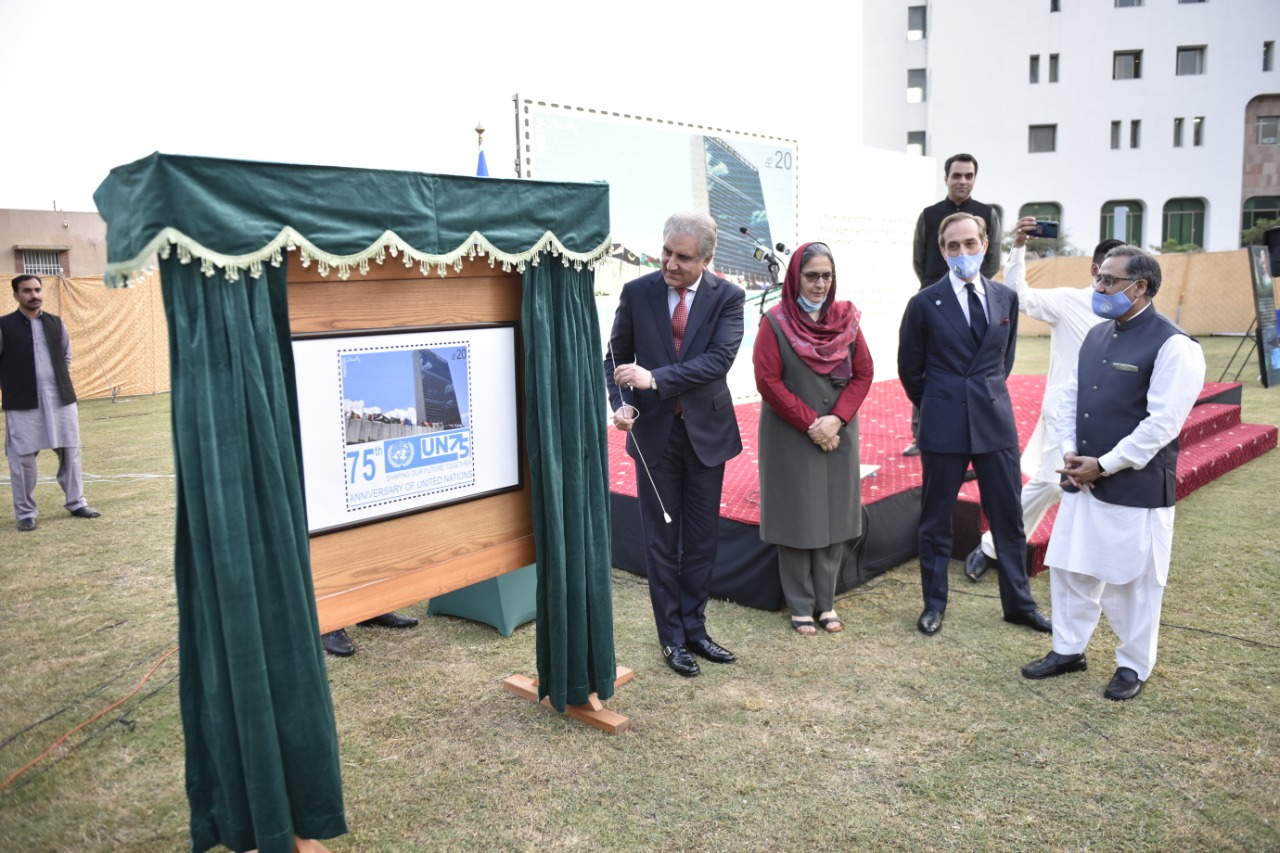 Foreign Minister Makhdoom Shah Mahmood Qureshi graced the occasion, attended by the Foreign Secretary, Heads of Diplomatic Missions and UN agencies based in Islamabad, as well as senior government functionaries. The UN Secretary General addressed the gathering through a video message. The UN Resident Coordinator in Pakistan, Mr. Julien Harneis, delivered a statement highlighting UN activities in Pakistan. A female Pakistani peacekeeper and a youth representative also shared their views.

The Foreign Minister, recalling the vision of Quaid-e-Azam Muhammad Ali Jinnah, reaffirmed Pakistan’s abiding commitment to multilateralism, with the UN playing a central role. He thanked all UN Agencies, Funds and Programmes working in the country for their partnership with Pakistan for advancing its socio-economic development objectives. The Foreign Minister noted Pakistan’s contribution of over 200,000 troops to 46 UN Peacekeeping Missions around the world, in addition to hosting one of the oldest Mission of this kind – the United Nations Military Observer Group in India and Pakistan (UNMOGIP). The Foreign Minister also highlighted the plight of people in Indian Illegally Occupied Jammu and Kashmir (IIOJK), suffering gross and systematic human rights abuse at the hands of the Indian occupation forces. He urged the UN Security Council to ensure the full implementation of its resolutions which guaranteed the Kashmiris’ right to self-determination.

Earlier, in his introductory remarks, Foreign Secretary Sohail Mahmood reaffirmed Pakistan’s unwavering commitment to multilateralism and to the fulfillment of the objectives and purposes of the UN Charter. He gave an overview of Pakistan’s active participation across all pillars of the United Nations, spanning the primary areas of international peace and security, sustainable development, and human rights. He also underlined the importance for the UN to ensure the implementation of UN Security Council resolutions on the Jammu & Kashmir dispute.

At the end of the ceremony, the Foreign Minister unveiled a special commemorative postage stamp issued by Pakistan Post to mark the 75th anniversary of the UN. A photo exhibition was also on display, depicting Pakistan’s contributions to the UN Peacekeeping, especially the participation of women, role of UNMOGIP, visits of UN Secretary General and President of the UN General Assembly to Pakistan earlier this year, 40 years of Afghan refugees’ presence in Pakistan, and Pakistan’s senior level representation at the UN.

UN Day – celebrated on 24 October every year – marks the anniversary of the entry into force in 1945 of the UN Charter. Pakistan joined the organisation on 30 September 1947 and has since remained an active Member State gaining the reputation of a consensus and bridge-builder with significant contributions to the work of the United Nations.