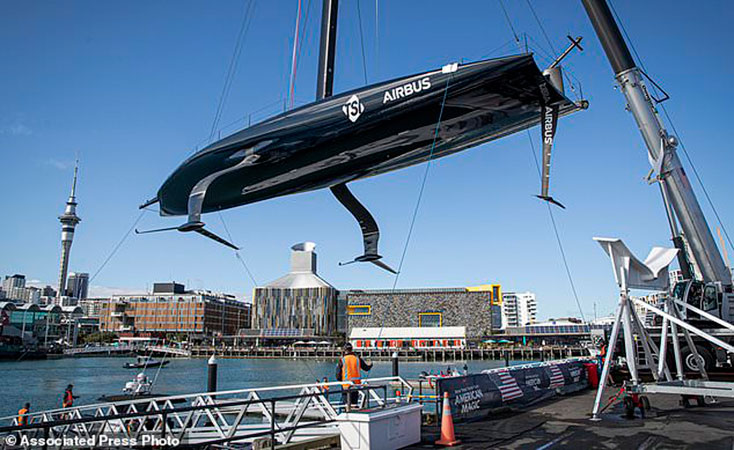 The black-hulled monohull, christened Britannia, was lowered gently into the water outside the Team UK base after a small naming ceremony.

Britannia, which will be helmed by four-time Olympic sailing gold medalist Ben Ainslie in the challenger series starting in January, appeared to mark a major development over the team´s first generation sailboat.

“Today marks a landmark moment for all of us,” Ainslie said. “A huge amount of hard work and dedication has gone into designing and building this race boat, including over 90,000 design hours and 46,000 construction hours.

“This is a big step forward for us as a team and we can´t wait to get out on the water in the Auckland Harbour.”

Ainslee said hard work lies ahead if Britain is to win the America’s Cup for the first time since it lost the first match in 1856 to the challenger America.

“The coming months will be an intense time as we will need to make every second out on the water in this new boat count to get the full potential out of her by the time we start racing in the America´s Cup World Series this December and beyond,” Ainslee said. “But we are all looking forward to taking on this challenge of a lifetime.”

Team founder and chairman Jim Ratcliffe sent a message of support to Ainslie and the British team during the naming ceremony.

“The America´s Cup is a magnificent competition with an extraordinary history and now I believe that for one of the first times in British history we are going to arrive at the start line with a truly competitive boat,” he said.

“As the song goes `Britannia rules the waves´ and we are all extremely hopeful that the team will finish by ruling the waves in Auckland and bringing the Cup back home for the first time in its history.”

The Britannia launch Saturday was part of a flurry of activity as the start of racing approaches.

American Magic launched its second generation race Patriot on Friday and Italian syndicate Prada is due to reveal its second boat Tuesday.

The yachts are all part of the AC75 class of 75-foot high-tech monohulls which rise out of the water on foils and are capable of extremely high speeds.