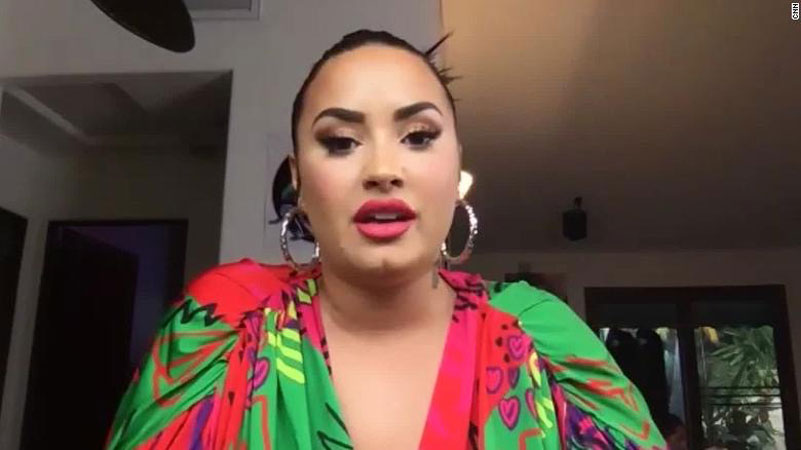 Demi Lovato is speaking singing out. With the 2020 presidential election less than a month away, the singer has taken to the recording studio—and the result is her newly released rally cry titled “Commander in Chief.”

Throughout the track, Lovato does not hold back as she raises her voice about the country’s leader. “We were taught when we were young / If we fight for what’s right, there won’t be justice for just some / Won’t give up, stand our ground / We’ll be in the streets while you’re bunkering down,” Lovato sings. “Loud and proud, best believe / We’ll still take a knee while you’re Commander in Chief.”

In addition to serving as a vehicle to voice her own criticisms, Lovato is also using the song to motivate everyone to vote. “Won’t give up, stand our ground… We’ll be in the streets while you’re #CommanderInChief. Video dropping tomorrow,” she wrote on her Instagram account. “I’m calling on all of you, please join me in voting for this years election. Find your voter information at iwillvote.com.”

In an interview with CNN, the performer explained the intentions behind her latest work. “It’s very important for me that I get to use my platform for something much bigger than just singing,” she said.

As for the country’s big decision ahead, Demi has said that she wants people to vote so that the result is a reflection of everyone’s participation. “We have to show up, we have to turn up and vote because it’s so important that our voices are heard,” she told CNN. “And honestly, for me, whether you are a Republican or Democrat, just get out and vote…so that at the end of the day, whatever happens, whoever wins—we can actually look and say, ‘Well, you know what? At least everyone got out there and voted and did their part and our country spoke.'”

On the heels of her September release, “Still Have Me,” the star is next slated to perform at the 2020 Billboard Music Awards on Oct. 14. It was previously announced that she would “give a world premiere performance of new music” at the annual award show, so the timing of this release certainly seems fitting. Fans will just have to tune in to find out at 8 p.m. ET on NBC.