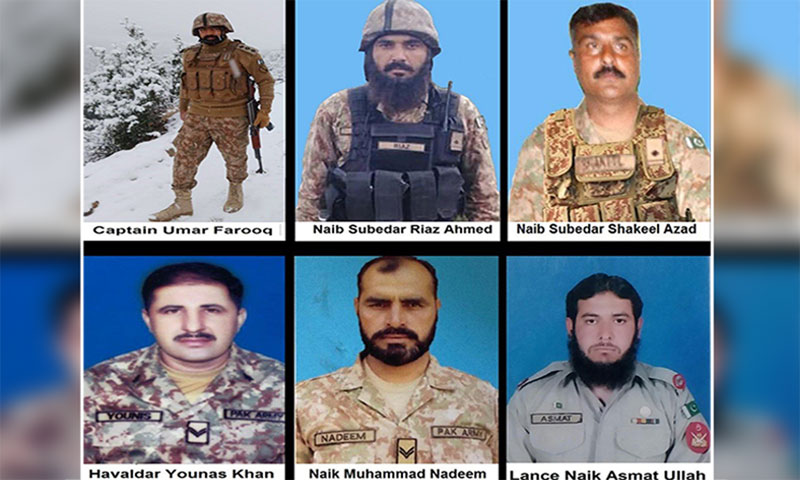 In the first incident, six security personnel were martyred in a militant attack on a convoy of the state-run Oil & Gas Development Company Ltd (OGDCL) on the Makran Coastal Highway in Ormara, Balochistan on Thursday, state broadcaster Radio Pakistan reported.

The security personnel lost their lives when terrorists opened fire on them on the highway in Gwadar.

Security forces cordoned off the area and started a search operation, the report said.

No group has claimed responsibility for the attack.

Prime Minister Imran Khan in a statement condemned the attack on the OGDCL convoy and sought a report into the incident, according to another Radio Pakistan report.

The premier expressed grief with the families of the martyred personnel of security agencies.

In the second incident, six Pakistan Army personnel were martyred in a “terrorist” bomb attack near Razmak area of North Waziristan, the military’s media wing said on Thursday.

It said a convoy of security forces was attacked through an improvised explosive device (IED), resulting in the martyrdom of one officer and five soldiers.

The latest incident comes four days after two soldiers were martyred and three others sustained injuries in an attack on a security post in the Shawal valley of North Waziristan.

Officials said that militants attacked the post in the Manara Mandara area adjacent to South Waziristan district. They said militants fired rockets in the pre-dawn attack on the post which left two soldiers martyred and three others wounded.

Last month, security forces had killed four terrorists, including militant commander Ihsanullah, alias Ihsan Sanray, in an intelligence-based operation (IBO) in what was termed as a “major breakthrough” by the ISPR.

The operation was carried out in Ghariom, Shaktu, near the inter-district boundary of North and South Waziristan.

That IBO had come days after wanted terrorist Waseem Zakeria was killed during an intelligence operation in North Waziristan along with four accomplices.

Ten notorious terrorists were also arrested during the operation near Mirali, the ISPR had said at the time. It said Zakeria was the mastermind of 30 attacks, including the targeted killing of government officials and security forces personnel. Zakeria was also believed to be involved in the assassination of Zubaidullah Khan, a CSP officer of the Federal Information Group, posted as director of the Pakistan Housing Authority in Islamabad.

The killing of the senior civil officer in Mirali had raised concerns about the state of security in once-volatile North Waziristan which has seen an uptick in attacks on security forces since the Zarb-i-Azb operation in June 2014.

A lawmaker from the tribal district had told the Khyber Pakhtunkhwa Assembly in September that 200 people had lost their lives to targeted killings since February 2018. There was, however, no official corroboration or denial of the claim by the lawmaker. According to APP, Prime Minister Imran Khan on Thursday condemned the attack on the convoy of Oil and Gas Development Company Limited (OGDCL) at Makran Coastal Highway, and sought report of the incident.

He commiserated with families of the security personnel martyred in the attack, lauded the services of the martyrs and prayed for the departed souls.