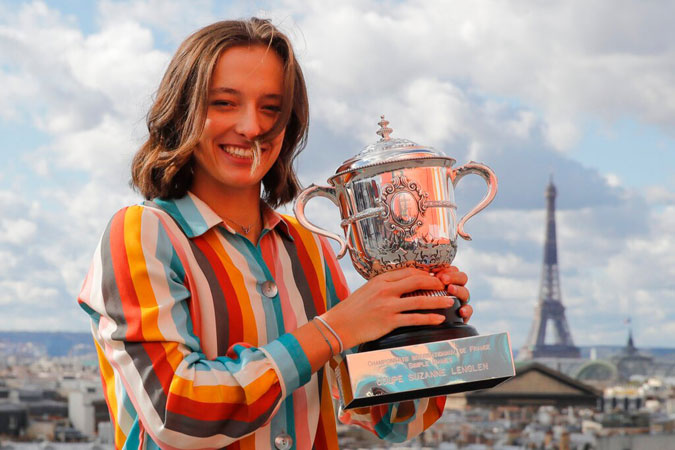 WARSAW: Even in the glow of a champagne performance in Paris, Poland’s newly-crowned French Open champion Iga Swiatek stuck to still water as she celebrated a maiden Grand Slam success and offered a glimpse of a new era in women’s tennis. Celebrations have been in full flow since the unseeded 19-year-old lifted the trophy on Saturday, becoming the first Pole to claim a Grand Slam singles title and the youngest to win the tournament since Monica Seles in 1992. But Swiatek’s cool head is helping her to take her triumph, secured with a 6-4 6-1 win over fourth-seeded American Sofia Kenin in the final, in her stride. During a celebratory dinner at a Japanese restaurant, Swiatek’s discipline remained firm.

“We drank to her health, which she of course refused. It made an impression on me after such a success,” her trainer Piotr Sierzputowski said. The 28-year-old coach thinks that mindset will be essential as Swiatek prepares for a short break before training for the Australian Open starts again in the coming weeks. “Iga is a professional. If professionals were to suddenly change their behaviour, or react dramatically because of such a result, that wouldn’t be good. I’m proud of her for being so calm,” he added. Swiatek, whose father was an Olympic rower and mother a doctor, is due to fly back to Poland on a private jet sponsored by Red Bull. New sponsorship deals, celebrity accolades and media interviews are par for the course after joining the Grand Slam elite, but the new-found fame might make Swiatek’s life more challenging, her coach fears.

Used to moving around Warsaw with relative ease, Swiatek’s anonymity will now be gone, Sierzputowski said, something which could lead the teenager to more training outside of Poland. Sierzputowski says he is focusing on the road ahead, which involves maintaining Swiatek’s peak performance and her confidence as she goes into a new season. Her triumph at the French Open was remarkable. She was the first Polish woman to reach the final in 81 years and the first at any major since Agnieszka Radwanska at Wimbledon in 2012. But Sierzputowski said his protege must keep her feet on the ground and continue the hard work. “The fact that she was able to do this in one tournament doesn’t mean she will be able to do it daily,” he added. “I know that while she is training, she is able to do this… But we have to get to the point where this sort of playing is normal for her.”