The 10 (known) officials around the President with Covid

Kaleigh McEnany is the latest to test positive for the coronavirus. In fact, as I wrote this article, the news o her test just broke. Many people in the President`s circle have been diagnosed with Covid-19 and many believe the nomination ceremony of Amy Coney Barrett at the White House. 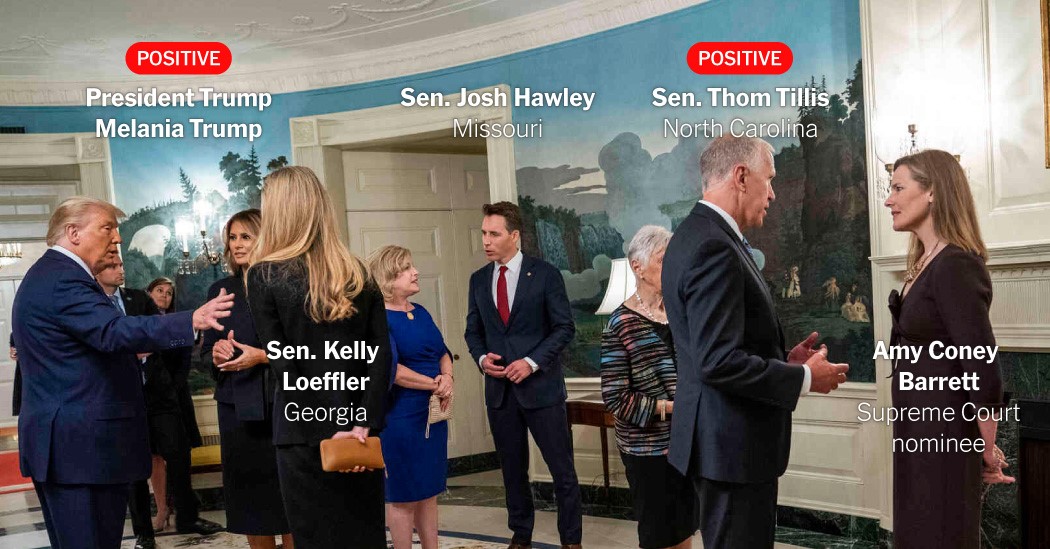 The Junior Senator from North Carolina announced his positive test in a statement and on twitter:

“Tonight my COVID-19 test came back positive. I’m following the recommendations of my doctor. Thankfully, I have no symptoms and feel well.” he wrote.

This is a photo of him at the event around President Trump and others without a mask.

After testing positive his office gave a statement saying:

“After learning of this exposure, the senator was tested yesterday afternoon. This test came back positive”.

The former counselor to the president attended the SCOTUS nomination ceremony due to which many are blaming her to do so.

The current White House principal assistant press secretary tested positive for Covid-19 on Monday. He is one of Kayleigh McEnany`s deputies.

The White House assistant press secretary tested positive on Monday. She is also one of the deputies to WH Press Secretary McEnany.

The Republican Senator from Utah tested positive on Friday:

“Yesterday morning, I was experiencing symptoms consistent with longtime allergies. Out of an abundance of caution, I sought medical advice and was tested for COVID-19. Unlike the test I look just a few days ago while visiting the White House, yesterday’s test came back positive. On advice of the Senate attending physician, I will remain isolated for the next 10 days.”, he wrote in a statement.

His positive result puts the SCOTUS vote in threat of delay as the GOP might not have enough votes at the time to confirm Judge Barrett. Moreover, he is a member of the Senate, Judiciary committee. The same committee that will hold hearings for the confirmation process on the week of October 12th.

Christie is a Former governor of New Jersey. He helped the President prepare for the first debate.

In an interview, Christie admitted that there were not many masks worn at that preparation event. “I just received word that I am positive for COVID-19. I want to thank all of my friends and colleagues who have reached out to ask how I was feeling in the last day or two.”, he wrote on twitter.

He is now in the hospital as a “precautionary measure”, as he suffers from asthma, too.

The Presidents counsellor had tested positive on Thursday. In an interview with Fox news, Trump confirmed that, Hope Hicks, “did test positive”. She is known to have been a potential spreader to the President.

In conclusion, the super-spreader event two weeks ago is blamed for the spread of the coronavirus among the US government. Thankfully, Joe Biden who debated Trump earlier last week has tested negative. So have his wife, Jill Biden, and his Running mate, Kamala Harris.