Before attack, a Pakistani teen sought better life in France 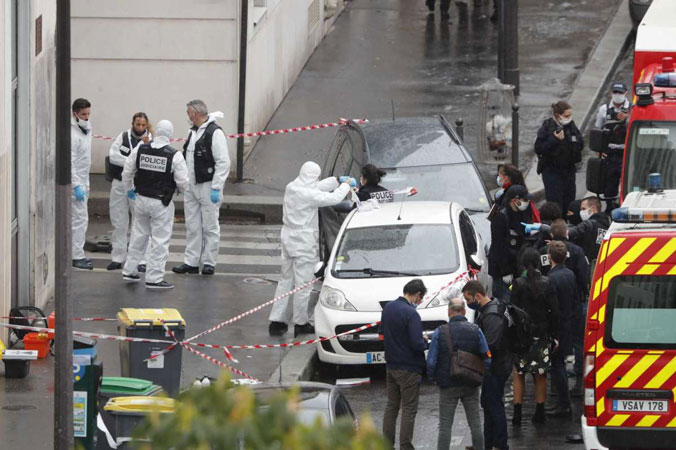 Ali Hassan was only 15 when he left Pakistan to be smuggled to Europe, following the path of his older brother and many other young men from his home country dreaming of a better life.

Nearly three years later, Hassan is today in a Paris jail after allegedly attacking and seriously wounding two people with a meat cleaver. Before the Sept 25 attack, he proclaimed in a video he was seeking vengeance after the French satirical newspaper Charlie Hebdo published blasphemous caricatures of Holy Prophet (PBUH).

Little is known about Hassan’s time in France. There has been confusion over his age, but The Associated Press obtained his official identification documents in Pakistan that confirmed he is currently 18.

French authorities are investigating the Sept 25 stabbings as an extremist attack. The stabbings echoed a January 2015 attack on the newspaper that killed 12 of its staffers by militants who claimed they were acting in the name of al-Qaida.

So far, there has been no indication Hassan was connected to any terrorist group. Hassan’s journey began in his home village of Kotli Qazi, deep in a rural area of Punjab province. The tiny village lies down a narrow, rutted dirt road weaving through vast agricultural fields. The small cement houses are crowded together, their walls packed with dung patties baking in the blistering noon day sun. By sunset they’ll be peeled off the walls and used to fuel the evening fires.

Many of the young men, including childhood friends of Hassan, said they dreamed of reaching Europe to find prosperity – at least 18 youths from the village have emigrated abroad in recent years. At the same time, they held up Hassan as a hero for carrying out the attack.

In the district where Kotli Qazi is located, Tehreek-e Labbaik holds powerful influence. Only a few months after Hassan arrived in France, Labbaik Party-backed protesters rallied and blocked roads in the district and other parts of Pakistan in November 2018, furious that a young Christian woman, Asia Bibi, was freed from death row where she’d faced execution on blasphemy charges.

“He went to France because compared to other countries, like Saudi Arabia, earning there is much better,” a childhood friend, Ikram, said of Hassan. “Young people from our area want to live in Europe.” But, he added, “all our friends said if they were in his place they would have done the same if they had seen anything blasphemous against Holy Prophet (PBUH).”

Ali’s long-time neighbor Amina, in her 80s, remembered Hassan as a good boy. “He never went looking for mischief like some of those other boys. No, he just wanted to study,” she said. Sitting on a traditional rope-woven bed in a dusty compound she shared with several family members she said: “Religiously he did the right thing. You may not agree, but he did right thing.”

Neighbors and shopkeepers said security agencies told them to say nothing of Hassan or the Paris attack. Several expressed concern for the image their tiny village was getting. “Please don’t hurt the dignity of our village, don’t take away our dignity,” pleaded one shopkeeper, who didn’t want to give his name fearful of the plainclothes police standing nearby. Hassan’s father, Arshad Mahmoud, refused to talk to reporters who knocked on his house’s gate. Shuja Nawaz, author, political and security analyst and a fellow at the Washington-based Atlantic Council, said the influx of young migrants from countries such as Pakistan into Europe brings two factors into collision. “First, the conditions in the home countries, like Pakistan,” he said. “Second, in the Western countries, where migrants end up legally or illegally, there is a Ghettoization of Muslim immigrants who turn to religion as a defense mechanism and rallying point.”

Official identification documents seen by the AP confirm Hassan’s date of birth as Aug 10, 2002, the second youngest of nine siblings.

An older brother, Bilal, now 32 and reportedly living in Italy, was the first of the siblings to travel to Europe, neighbors and police officials said. Hassan’s younger brother, Ali Murtaza, now 16, also migrated to France and was arrested along with Hassan, though he was later released. Ikram, Hassan’s friend, said the “illegal” way to Europe can be very dangerous but from his village the majority who go are, like Hassan, between the age of 15 and 16 because minors often won’t be ejected.

Hassan embarked on the journey in early 2018, crossing through Iran, Turkey and Italy and finally reaching France in August 2018. He was registered as an unaccompanied minor and was initially put in housing in the Paris suburb of Cergy, where he received aid accorded to minors.

At some point, he moved to Pantin, a working-class suburb that has a large immigrant population, including North Africans, Sub-Saharan Africans and Pakistanis. He was living in an apartment with several other Pakistanis in a grimy brick building above a hooka bar and an auto parts shop. “They were quiet, they had their lives, left in the morning to work,” said Zyed Zaied, who runs the auto shop. He said he didn’t know where Hassan worked but said Pakistanis often find jobs in restaurants.

It was in Pantin that Hassan was living when, on Sept 1, Charlie Hebdo republished the blasphemous caricatures. On Sept. 25, Hassan had an appointment at the Val d’Oise regional administration to review his residency situation. Hassan had just turned 18, meaning he was no longer a minor and would have lost his claim to residency in France unless he could make an asylum case.

Instead, Hassan went to what he thought were the offices of Charlie Hebdo, unaware that they had moved. With a cleaver, he attacked two people who, it turned out, worked for a documentary film company, seriously wounding them. He was caught soon after, speckles of blood on his forehead, on the steps of the Bastille Opera.