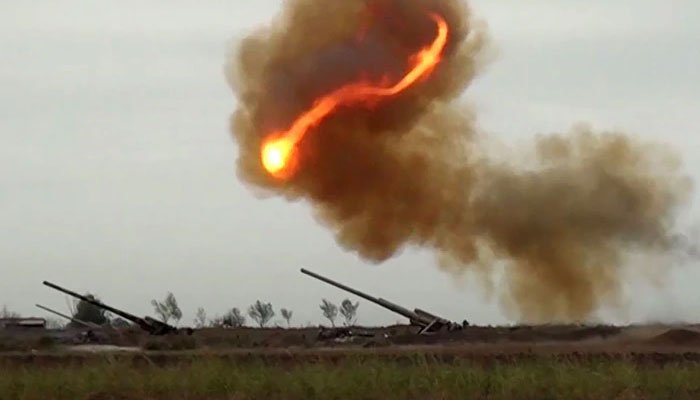 STEPANAKERT, AZERBAIJAN: Amid fierce clashes, Armenia leaders said it was facing a ‘historic threat’ as the country reported heavy losses during the long-sought dispute at Nagorno-Karabakh region.

Yerevan’s defence ministry said separatist forces in Karabakh had repelled a massive attack by Azerbaijan, seven days after fighting erupted again in the decades-old dispute over the ethnic-Armenian breakaway province.

Armenia also announced the deaths of 51 more separatist fighters, taking the number of fatalities on both sides above 240.

Azerbaijan’s defence ministry meanwhile said its forces had “captured new footholds” and President Ilham Aliyev claimed that his forces took the village of Madagiz, a strategic hamlet within firing range of an important northern road.

In an address to the nation on Saturday, Prime Minister Nikol Pashinyan called on Armenians to unite.

“We are facing possibly the most decisive moment in our millennia-old history,” Pashinyan said.

“We all must dedicate ourselves to a singular goal: victory.”

The fighting over Nagorno-Karabakh has threatened to draw in powerful players like Russia and Turkey.

Armenia is in a military alliance of former Soviet countries led by Moscow, which maintains a military base there, while NATO member Turkey has signalled its full support for Azerbaijan’s military operations.

Both sides have been accused of hitting civilian areas, and Azerbaijan said Saturday that Armenian artillery had shelled 19 of its settlements overnight.

On Saturday in Stepanakert, residents cleared wreckage and swept up glass from the shattered windows of their homes and shops.

“This is a great sorrow for our community, for our people,” Nelson Adamyan, a 65-year-old electrician, told AFP outside his damaged residential building.

“But we will stand for our freedom, we will always be free.”

Others, however, decided to flee.

AFP  journalists saw families gathering in the border town of Goris as a first step to reaching Yerevan, 350 kilometres (220 miles) to the northwest.

Dropped off in front of a grey Soviet-style hotel, they waited for the public buses authorities are sending or hoped for lifts from volunteers providing a taxi service.

“We must come to their aid,” said Ani, who had driven from Yerevan to help families leave.

“We help our country as we can.”

The new fighting erupted on September 27 and international calls for a halt to hostilities have gone unanswered.

The leader of Karabakh, Arayik Harutyunyan, said he was going to join “intensive fighting” on the frontline.

The Britain-based Syrian Observatory for Human Rights registered the deaths of least 36 militants from Syria fighting alongside Azerbaijan´s forces in over the last 48 hours, bringing their reported deaths to 64.

The war monitor said 1,200 combatants from pro-Ankara Syrian factions had been dispatched to the conflict.

Russia, the United States and France – whose leaders co-chair a mediation group that has failed to bring about a political resolution to the conflict – this week called for an immediate ceasefire.

Armenia said Friday it was “ready to engage” with mediators but Azerbaijan – which considers Karabakh under Armenian occupation – has said Armenian forces must fully withdraw before a ceasefire can be brokered.

Karabakh’s declaration of independence from Azerbaijan during the collapse of the Soviet Union sparked a war in the early 1990s that claimed 30,000 lives.

Talks to resolve the conflict have made little progress since a 1994 ceasefire agreement.

The breakaway province is not acknowledged as independent by any country – including Armenia – and Karabakh´s foreign ministry said Saturday that international recognition was “the only way towards peace and security in the region”.

Yerevan has accused Turkey of dispatching mercenaries from Syria and Libya to the fighting – an allegation confirmed and denounced by Russia and France.