Trump’s positive test underscores that this is the Coronavirus Election 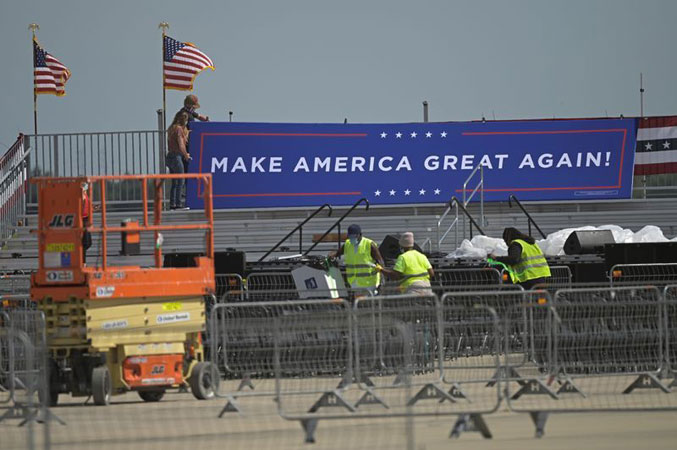 President Donald Trump’s positive test for COVID-19 confirmed what most voters already knew: This is the Coronavirus Election.

During the closing stretch of the presidential race, Trump had worked furiously to shift public attention away from the virus and his handling of the pandemic, urging more states to open up fully and claiming the worst was over.

But the disclosure of Trump’s illness on Friday shredded those arguments, returning the virus to center stage with just a month to go until the Nov. 3 election, and reminding voters yet again of the biggest public health crisis in a century that has killed more than 200,000 of their fellow Americans.

“The more of the spotlight is on coronavirus, the worse it is for the president,” said Dennis Darnoi, a Republican strategist in the key battleground state of Michigan that Trump won by less than a percentage point in 2016.

Even worse for the president, however, may be that his downplaying from the outset of the danger posed by the virus has come back to haunt him in the most personal way, making Democrat Joe Biden’s prudence during the campaign look prescient.

A White House official said on Friday that Trump will move into a special suite at the Walter Reed military hospital near Washington for the next few days as a precaution, adding doctors urged the move so he could get immediate care if needed.

With Trump’s health uncertain, his battle against Biden could be on hold for an indefinite period of time, with Trump unable to travel, stage his signature rallies or attend fundraisers during the election’s final phase as millions are already casting their votes.

More than 2.8 million Americans have voted early for November’s election, according to the U.S. Elections Project at the University of Florida. At this point in 2016, fewer than 75,000 people had submitted early ballots.

The White House said on Friday it was exploring ways for Trump to communicate with the public during his quarantine. Biden, who said on Friday he tested negative for coronavirus after sharing the debate stage with Trump on Tuesday, meanwhile has signaled he intends to campaign as normal, proceeding with an event in Michigan on Friday as planned.

Trump’s illness stands to send a confusing signal to supporters, many of whom now share his skepticism of using mail-in ballots for the election, wearing masks, practicing social distancing and other virus-related safety protocols.

Trump has repeatedly belittled Biden for his light travel schedule and for often wearing a mask in public. He also boasted about holding large rallies featuring maskless supporters packed together, claiming there had been “no problem whatsoever.”

“One of the judgments voters are making is which candidate would have better managed the response to the coronavirus and who has the leadership to lead us out of this national emergency,” said Ben LaBolt, a former top aide to Democratic President Barack Obama.

Even as Trump has repeatedly suggested the country had turned the corner in the pandemic, voters have felt differently.

Every week since March, roughly eight out of 10 American adults have said they are personally concerned about how the virus was spreading, according to Reuters/Ipsos polls. That includes about 9 in 10 Democrats and nearly 7 in 10 Republicans.

It is also top of mind among a plurality of Americans who are expected to cast ballots in the election. The latest Reuters/Ipsos poll, conducted Sept. 29-Oct. 1, found that 26% of likely voters said the most important factor driving their choice for president was the candidates’ perceived ability to help the nation recover from the pandemic. They were less likely to cite other drivers, such as the candidates’ plan for the economy or the need for a “tough on crime” president.

In that regard, Biden has held a clear advantage. The latest poll found that 50% of likely voters said Biden would be best to deal with the coronavirus, while 39% said Trump would be better.

Indeed, Biden has made Trump’s handling of COVID-19 a primary theme of his campaign, while Trump has instead tried to focus on economic recovery, “law and order” in the face of national protests over racial justice and most recently, his choice of conservative Amy Coney Barrett for the U.S. Supreme Court to replace late liberal Justice Ruth Bader Ginsburg.

The pause in campaigning comes as Trump runs against the clock to change the trajectory of a re-election effort that polls show him losing. He also has been falling behind Biden in fundraising, allowing Biden to dominate the airwaves with ads.

Trump’s campaign had been encouraged by positive economic news coming out of key battleground states such as Arizona and Florida, as well as polls that show voters still tend to trust Trump over Biden on the economy, according to one campaign adviser who asked to remain unidentified to speak candidly.

Scott Hagerstrom, who managed Trump’s 2016 campaign in Michigan, said the president’s bout with the virus could engender some sympathy in voters. “He’ll be able to say, I went through it. I survived.”