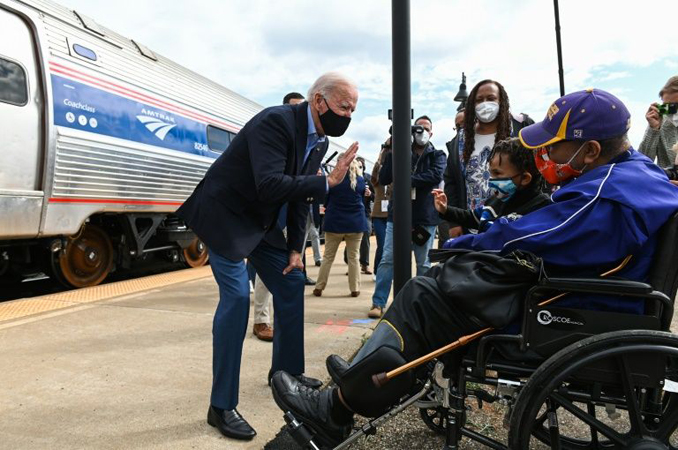 US President Donald Trump scrambled Wednesday to quell an uproar over his failure to explicitly denounce white supremacist groups during his debate debacle with Joe Biden, who branded his election rival a “national embarrassment.”

The bitter adversaries returned to the campaign trail one day after their off-the-rails showdown in Cleveland made headlines less for the substance than for its unrestrained chaos.

The toxic shout fest — with Trump constantly interrupting and Biden launching personal attacks — even prompted the overseeing Commission on Presidential Debates to announce it would be imposing new measures to help moderators “maintain order” at the upcoming two debates.

After his assertive performance Biden launched a whistlestop train tour Wednesday through battleground states Ohio and Pennsylvania where he hammered away at Trump.

“The president of the United States conducted himself the way he did — I think it was a national embarrassment,” Biden said in Alliance, Ohio.

He fiercely attacked Trump’s failure to clearly denounce white supremacist groups or the far-right Proud Boys, instead giving a shout-out to the male-only militia group by saying they should “stand back and stand by,” and that the real problem is “far-left” extremists.

“My message to the Proud Boys and every other white supremacist group is: cease and desist,” Biden said. “This is not who we are as Americans.”

Trump, in an apparent attempt to tamp down outrage over his comments, called on the group to “stand down.”

“I don’t know who Proud Boys are but whoever they are they have to stand down,” Trump told reporters. “Stand down, let law enforcement do their work.”

Trump’s backpedaling came after multiple Republicans distanced themselves from the president’s debate remark, with Senator Tim Scott, the only black Republican in the US Senate, saying Trump “needs to correct” his comments.

Biden, who leads in election polling, knocked Trump for failing to speak directly to the US public about their plight during the Covid-19 crisis, which has killed more than 206,000 Americans.

And during a train stop in Pittsburgh he assailed the president for “planting seeds of doubt” about US election integrity by saying mail-in voting will be riddled with “fraud like you’ve never seen.”

But Biden gnawed at the white supremacy issue throughout the day. At a stop in Greensburg, Pennsylvania — where hundreds of people gathered in what was one of Biden’s biggest crowds since the pandemic hit — he pointed to how the Proud Boys were already treating Trump’s words as a boost to their cause.

“They got a new emblem now, literally, it says ‘Stand down and stand by,’ implying that if he loses the election something may have to be done,” Biden, 77, said.

“I promise you, that won’t happen,” he added. “Nobody is going to get in the way of our democratic process going forward.”

Biden was also pushing his blue-collar roots, as he accepted the endorsement from the United Brotherhood of Carpenters and Joiners of America, with 550,000 members.

“Donald Trump sees things from Park Avenue. I see them from where I grew up in Scranton,” Biden said.

Snap polls on the debate performances of the presidential candidates leaned towards Biden, who withstood a barrage of barbs from the 74-year-old Trump while delivering some of his own.

The Democratic speaker of the House of Representatives, Nancy Pelosi, said Trump’s debate behavior demonstrated why she had recommended that Biden not debate him at all.

“You saw a political nervous breakdown, a meltdown,” Pelosi said on MSNBC.

Trump “has never respected the dignity of his office and he demonstrated that last night.”

The Cleveland debate was scheduled to be the first of three before the election but the acrimonious debacle led to calls by some commentators for the two others to be cancelled. In an interview with CNN, Biden’s running mate Senator Kamala Harris suggested it was unlikely that the Democratic nominee would bow out of the next debates.

The next debate is scheduled for October 15 in Miami.

Trump meanwhile flew to Duluth, Minnesota, a Midwestern state narrowly won by Hillary Clinton in 2016, for an outdoor rally with his faithful.

Ally Eid, 29, among several supporters standing in an early Wednesday drizzle in Duluth awaiting the president, said she was not offended at Trump’s brash debate outbursts.

“He speaks his mind and gets his points across and that’s why so many people support him,” Eid told AFP.

“He stands up for what everyone wants to say but they won’t say it on national television.”