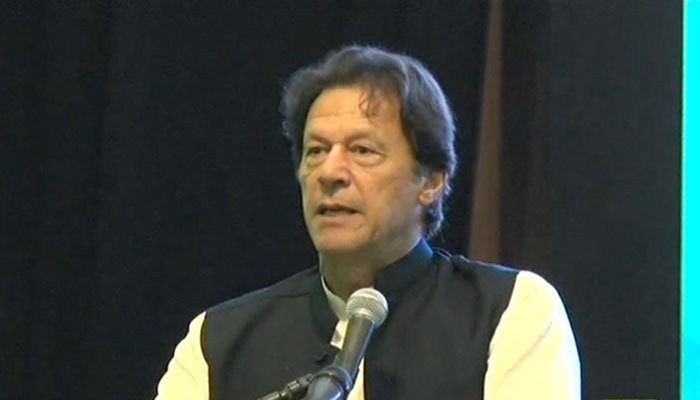 Renowned American historian, Indologist, Stanley Wolpert in his famous book ‘Jinnah of Pakistan’ writes “Few individuals significantly alter the course of history. Fewer still modify the map of the world. Hardly anyone can be credited with creating a nation-state. Mohammad Ali Jinnah did all three.”

Prime Minister Imran Khan’s address to the 75th session of United Nations General Assembly (UNGA) on September 25 via video link could be termed as historic and a commendable diplomatic triumph. Imran Khan, just in a few months has lifted Pakistan’s International stature to new heights and his struggle for the people of Kashmir is bound to be successful, Nazar Muhammad Gondal, Pakistan Tehreek-i-Insaf (PTI) leader expressed while commending PM’s address to the UNGA on Friday.

Gondal said that it was for the first time in the history of Pakistan that a Pakistani leader had taken a firm stance on the long-standing Kashmir issue and even last year the US president had offered mediation to resolve it. Kashmiris’ plight had once again got the attention of the world community, he added while lauding the PM’s address and firm determination on Indian Illegally Occupied Jammu & Kashmir (IIOJK).

“Due to the successful diplomatic achievement of Prime Minister Imran Khan, US President Donald Trump last year had clearly voiced concern over the Kashmir situation, going on there for the last many years,” he added.

He termed the Prime Minister’s speech as a historical opportunity which he exploited by highlighting the Indian atrocities in Indian Illegally Occupied Jammu & Kashmir (IIOJ&K), Afghanistan peace process, COVID-19, money laundering and other global challenges. Noted defence analyst, Dr. Maria Sultan commended the speech of the Prime minister and said that Kashmir was an unresolved agenda of participation between the two nuclear states.

Prime Minister Imran Khan has exposed ‘Hindutva’ fascist ideology effectively before the world, adding that Modi had turned the entire occupied valley into the largest prison of the world. Bharatiya Janata Party (BJP) and Rashtriya Swayamsevak Sangh (RSS) were following in the footsteps of Hitler, she said. Prime Minister Imran Khan in his virtual address to UNGA had again nailed down the RSS led terrorist regime of India, and its illegal occupation of the state of Jammu and Kashmir, she observed.

Maria Sultan said that it was a good omen that the Prime Minister was continuously raising and projecting the Kashmir issue at all international fora.The premier has exactly expedited his diplomatic efforts to appraise the world of the ongoing atrocities in IIOJ&K, she added.

“PM Imran Khan has shaken up world conscience by exposing use of brute force by Indian occupational forces, pellet guns and extra-judicial murders of innocent Kashmiris, “he said.

Minister for Kashmir Affairs and Gilgit-Baltistan Ali Amin Khan Gandapur, in his tweet, said, “I am proud to be a follower of Prime Minister Imran khan, he has the best vision and way forward for all the international challenges and issues.”

Mushaal Hussain Mullick, wife of Kashmiri leader Yasin Malik and a human rights’ activist lauded the speech of the premier at the UNGA forum and thanked him for advocating the just cause of the people of Kashmir and Palestine.

The both issues were on the top agenda of UNGA, adding this was exact time to put pressure on India to stop state terrorism, genocide and bloodbath on the oppressed Kashmiri people. Mushaal urged the United Nation to implement its resolutions on Indian Illegally Occupied Jammu and Kashmir (IIOJK) to give birth right to self-determination, she told APP.

She said that Indian Illegally Occupied Jammu & Kashmir (IIOJK) was an unfinished agenda of realization and Independence of Pakistan, adding that the issue would remain the same until the dispute was resolved in accordance with the United Nations Security Council resolutions and aspirations of the people of Kashmir.

The speech of Prime Minister Imran Khan on Kashmir was comprehensive, and now, the tight-lip International community should take cognizance of the plight of the people of (IIOJK), she said, adding suppressed Kashmiris have been living under complete lockdown since August 5, 2019.The lockdown imposed on some ten million Kashmiris in IIOJ&K had turned the occupied territory into the biggest prison on earth and suppressed Kashmiris continued to face gross human rights violations at the hands of more than 900,000 Indian forces deployed in the valley, she stressed.

She said that PM Imran Khan in his address highlighted the miseries of the people of the Indian Occupied Kashmir and exposed the extremist face of India.

Earlier, in July, 2019 US President Donald Trump, while welcoming Prime Minister Imran Khan at the White House had highly praised PM Imran khan terming him as a “very popular” leader of Pakistan.

Furthermore, the US president during his talk with Imran Khan had also offered mediation over the Kashmir issue.

Besides US president various other countries had praised Imran Khan’s peace vision at various forums and occasions saying it was for the first time that an advanced stage for ‘work closely with Pakistan’ to restore peace in Afghanistan and the region through developing great relationship has been set up.