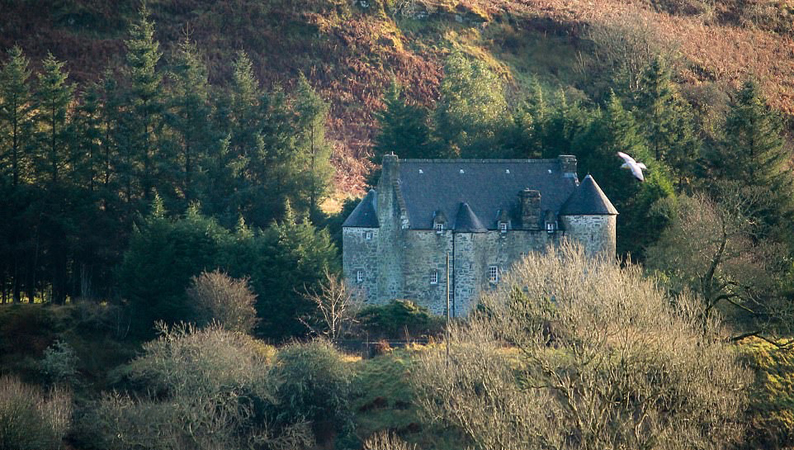 ‘Look! It’s the BBC breakfast man who went on Strictly!’ cried my daughter Evie, as we were shown to our seats in the formal dining room.

Fancy hotel trips with the children in tow usually require some form of discreet distraction at the dinner table.

Depending on the volume of fellow guests, a hushed game of Dobble usually does the trick.

But there’s no need for props at The Slaughters Manor House, a former 17th-century stately home in the heart of the Cotswolds, where the centrepiece of the restaurant – an arresting black-and-white photographic mural of cultural and political icons gathered as if for a party – instantly caught their attention.

The Queen – accessorised in a way Angela Kelly would never countenance – was still instantly recognisable despite the DJ headphones wrapped around her neck. As thankfully, in our increasingly lapsed Catholic household – mea culpa – was the Pope.

While the guessing game was not without its low points – it took some convincing for the children to realise that the figure they took for Will Smith was actually Martin Luther King – the hilarity was priceless.

‘That’s the guy from Lazy Town!,’ exclaimed Felix, pointing towards a dark, flamboyant figure not entirely dissimilar to the eerie lead character from a long-gone CBeebies show.

Depending on the volume of fellow guests, a hushed game of Dobble usually does the trick

For my husband and I, relieved to be spending our first night away from the taunting tins of Farrow and Ball paint lined up in the hallway since the second week of lockdown, the elegant interiors of The Slaughters Manor House had already triggered a more domestically charged guessing game.

‘Definitely Middleton Pink,’ I muttered, glancing enviously around the walls of the snazzy drawing room, desperately trying not to spoil the mood by asking yet again when our younger daughter’s bedroom – due to be decorated in the same colour – would ever be finished.

‘Ooh, Brinjal,’ exclaimed my husband cheerily, as we descended the aubergine painted stairwell to dinner. A five-litre pot, destined for our downstairs loo, had yet to be opened. ‘It does come up nicely.’

The question was, would we ever find out?

Time to stop agonising over how little we’d achieved in lockdown – and be grateful that this impeccably stylish Cotswolds haven is once again open for business.

The week we stayed, occupancy was at an impressive 98 per cent. With its classic limestone facade, five acres of beautifully manicured grounds, finely furnished guest rooms and the friendliest of service, it’s easy to see why. We stayed in the Coach House in an inter-connecting junior suite that was more than generous enough to accommodate the disparate needs of a family of five.

Within minutes, my daughters had transformed their substantial den into a dressing room while my son – always looking for a new nest – took up camp on the chaise longue with his game console. All my husband needed was an inviting window seat, plus portable radio, to catch up with the cricket.

Ever appreciative of hotel bathrooms – talk of modernising our own is now in its 12th year – I headed to the ensuite. Who needs foreign sun, sea and sand when you can sip sloe gin – the complimentary flasks in the bedrooms are a welcome touch – in a free-standing bath while gazing out on the rolling hills that have moved our greatest scribes?

Even our daughters were moved to update their social media accounts, inspired by the hotel’s highly Instagrammable interiors. Pop art on a wood-panelled wall. A row of delectable baby pink velvet chairs encircling a brass topped bar. What finer backdrop does a teen need?

Had I been 20 years younger, I might have joined them. Certainly, the three-course dinner – exquisitely presented Cornish crab, followed by tender Herdwick lamb and a mouth-watering meringue finale of cherry vacherin – had me close to scrabbling for my phone.

Breakfast was an equal delight. Smoked salmon and scrambled eggs may be a hotel mainstay, but I’ve seldom had it so good.

One last gaze into the mural of the great and the good before we checked out and headed home. Felix sighed. ‘I wish Paddington was in it.’ I’m sure Paddington does, too.