No development project of previous government stopped in Punjab: CM 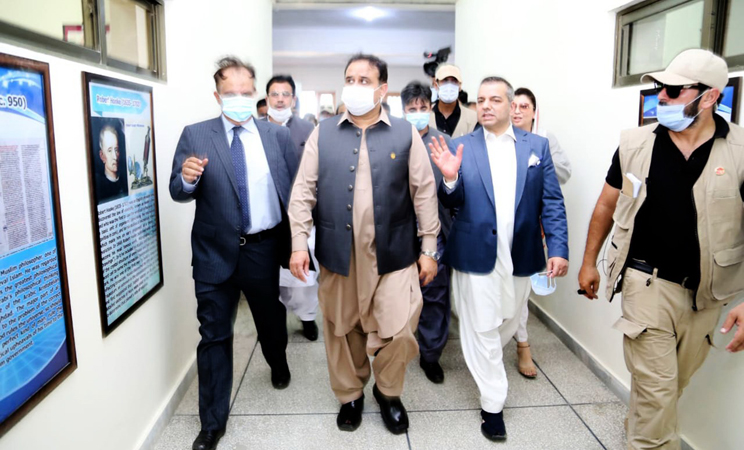 The CM chaired the 32nd meeting of Daanish Schools Authority and announced plans to establish new Daanish schools in Bhakkar and Taunsa. He gave in-principle approval to launch Honhaar Punjab Program to encourage best-performing students of academics, sports, fine arts and science and technology in the shape of cash prizes.

Talking to the media in Tibba Sultanpur, the CM stated that Daanish school authority meeting has been held in a remote area for the first time and instructions have been issued to solve the problems. The PTI government has neither halted past government’s projects nor stopped work on them. Work has been completed on the orange line metro train and it will be run soon. Similarly, the metro bus service has not been stopped, he said. The past government closed down many projects of the earlier government in their tenure.

He pointed out that work on the new Punjab assembly building remained suspended for ten long years. It was resumed in the tenure of the incumbent government. Similarly, the incumbent government completed the remaining work of Wazirabad cardiology hospital which remained suspended in the previous tenure. He maintained the motorway rape incident is shocking adding that one accused has been arrested while another perpetrator will be arrested soon. All requirements of justice will be fulfilled, he assured.

The Punjab government has provided complete funding to the Daanish schools. It is public money and no one is giving it from his pocket, he added. Similarly, a committee has been constituted under law minister for carving out new tehsils, districts and divisions and steps will be taken in the light of the recommendations of this committee. Formulation of new districts and tehsils will be reviewed on an administrative basis in Punjab, he added.

PTI assembly members and office-bearers also called on the CM and apprised him about the problems of the area. The CM announced that he will visit every tehsil to solve public problems on the spot. The areas left behind in the development process will be moved forward and the journey of development will be spread across backward areas, he added.

The constituency-related problems of the parliamentarians will be solved and the administration should keep close contact with them, he said. 50 thousand have been given employment in two years and more job opportunities will be provided in the next three years. The CM announced that health and education facilities will be further improved in backward areas. The problems of backward areas cannot be solved while sitting in Lahore, he maintained. It is imperative to personally monitor public issues by visiting remote and far-flung areas, the CM stated and assured that no stone will be left unturned for the solution of public problems.

The CM also inaugurated Mailsi Siphon Project and started the project of enhancing Mailsi siphon capacity and SMB link canal remodelling. More than four billion rupees have been spent on it. Now, an additional flow of 1600 cusec water to Lower Bahawal Canal will be made possible to irrigate an additional three thousand acres of land.

Agriculture is key to the national economy and the Punjab government is proactively working to improve the canal system, the CM said. The CM was told that 25-kilometre long canal’s embankments, regulator and bridges have been raised through the remodelling of SMB link canal. Provincial ministers Mohsin Leghari, Jehanzeb Khan Khitchi, assembly members, Multan Commissioner and DC were also present.

Earlier, the CM and Governor Ch. Sarwar went to the residence of Chief Whip in Punjab assembly Syed Abbas Ali Shah in Mianchannu and offered Fateha for the departed soul of his mother. They extended sympathies to bereaved members of the family. Transport Minister Jehanzeb Khan Khitchi was also present on this occasion.