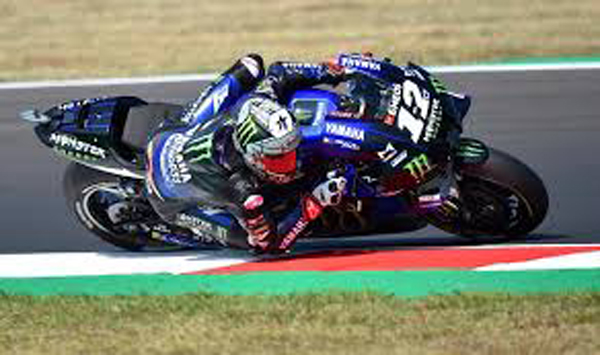 SAN MARINO: Yamaha’s Maverick Vinales took pole position for Sunday’s San Marino Grand Prix after setting a lap record of one minute, 31.411 seconds in qualifying to edge out Petronas Yamaha’s Franco Morbidelli in Misano on Saturday. It was the Spaniard’s second pole of the season and he was 0.312 seconds quicker than Morbidelli. Championship leader Fabio Quartararo will start the race from third on the grid. With Misano welcoming fans back into the grandstands with social distancing amid the COVID-19 pandemic, supporters had plenty to cheer as seven-times MotoGP champion Valentino Rossi qualified in fourth for his home race. Four Yamaha bikes claimed the top four places in qualifying for the first time. LCR Honda rider Cal Crutchlow, who had earlier been declared fit for the race after having arm surgery following last month’s Styrian Grand Prix, was forced to withdraw due to complications that were discovered during a medical check on Saturday.