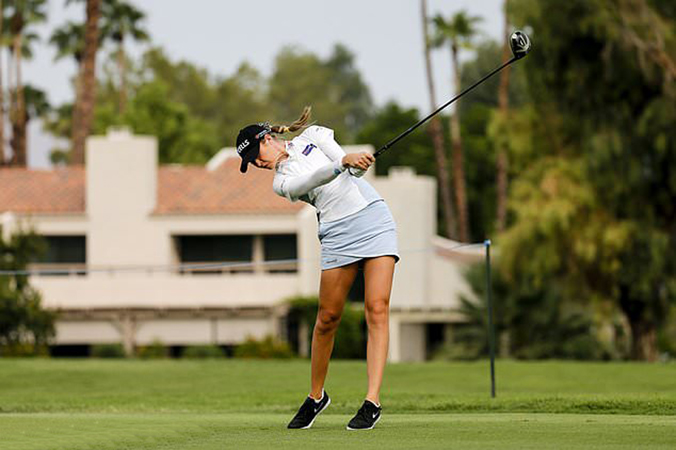 RANCHO MIRAGE: The numbers suggested a stress-free time in the desert for Nelly Korda, who had five birdies and a clean card Friday for a 5-under 67 to build a two-shot lead going into the hot weekend at the ANA Inspiration.

All she could think about were two pars.

The only fairway she missed was on her 11th hole, the par-5 second, and she was badly out of position the entire way until making an 18-foot par putt to escape her big mess. One hole later, after hitting a fat shot from the fairway, she again had to make a par putt from some 25 feet.

“I did not know what I was doing on those two holes,” Korda said. “I was happy those two went in. Golf is just all about momentum, so you roll one in here and there and it just makes it a lot easier.”

It only figures to get harder from here.

Korda was at 11-under 133, two shots clear of Mirim Lee, who also played bogey-free in the rising heat for a 65. Joining them in the final group is a daunting figure in these parts, Lexi Thompson, a past champion at Mission Hills who can overpower the Dinah Shore course.

Thompson made up ground quickly with three birdies in a four-hole stretch at the start of her round, including a 4-iron from 220 yards to 6 feet on the par-5 second (she missed the eagle putt) and a 9-iron from 164 yards on the par-3 fifth that led to a 15-foot birdie.

With the tee moved up on the par-5 18th, she swung for the fences and nearly pulled it into the lake, saved by the September date because the ball sinks instead of rolls in the Bermuda rough. She settled for par and a 67 to finish four shots behind, along with Nanna Koertz Madsen (69).

“I left a few out there, but also I made a lot of good putts,” Thompson said.

Danielle Kang looked poised to join the chase, a big week because she is projected to reach No. 1 in the world with a victory. Her momentum was slowed by bugs, a brick wall and a bridge.

Kang came in too steep on a wedge from the 10th fairway and was 10 feet short of the green. She opted to use her putter, but backed off three times from bugs flying around her face. Then, she left it 7 feet short and missed the par putt. She stalked to the back of the green, clearly annoyed, and it didn’t help when she and Anna Nordqvist were put on the clock.

Kang was out of sorts, quickly walking after missed putts.