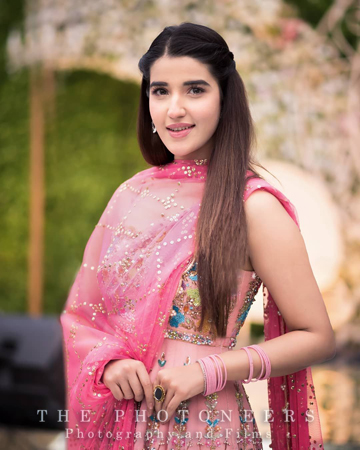 Though, the ‘Dobara Phir Se’ actress clearly mentioned in the caption that the video-a lip-sync on Madam Noor Jehan’s iconic Punjabi song ‘Mundiya Sialkotiya’- is in no way a comparison and she can only imagine achieving the greatness Madam achieved in her life, the video received a lot of love from her fans.

In a long note, Hareem Farooq also revealed the reason why she filmed the video.

She claimed that her Dada Abu watching Madam Noor Jehan’s Anarkali with her and her sister was one of the fondest memories of her childhood.

In a long note, Hareem Farooq also revealed the reason why she filmed the video

“He adored Madam so much that I, as a kid, started developing the same kind of love for her and unknowingly I would start lip syncing every time ‘sada hoon apnay pyar ki* would play. I remember being so fascinated by her beautiful and unmatched expressions that I just couldn’t take my eyes off her. Her voice was so magical and full of expression that it would just make me want to sway and act on it as she sang,” wrote the ‘Parchi’ actress.

She added that recently her friend made her listen to ‘Mundiya Sialkotiya’ and the moment she heard the track it instantly took her back to her childhood.

“What I share with you all today is extremely special and dear to my heart. In all honesty, it is only a fraction of what I call a tribute to an icon. All I’ve tried to do is, very nervously, pour my heart out, with the purest of intentions, in this video to her angelic voice and do all my best to perform the expressions I felt while listening to it. I humbly post this with all my love and adoration for Madam Noor Jehan and nothing more. We miss you Madam and thank you for all your efforts in making Pakistan proud and being such an inspiration for the world to remember,” maintained Hareem.