Punjab IGP ‘shown the door’ over row with Lahore CCPO 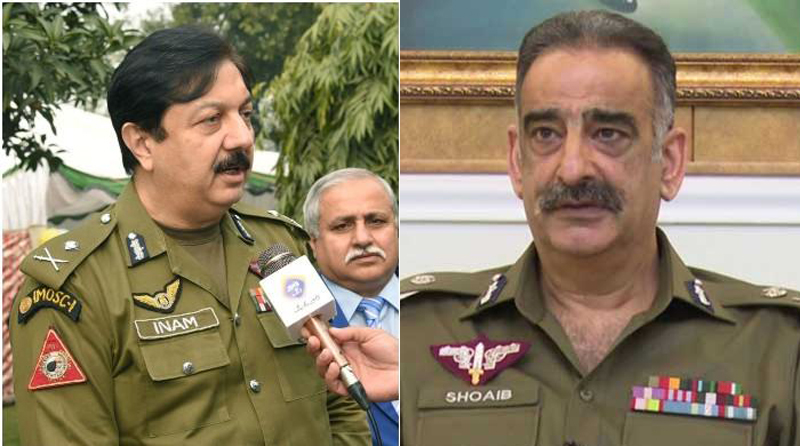 The Punjab government on Tuesday removed Shoaib Dastagir from the post of Inspector General of Police and appointed Inam Ghani as the new police chief in Punjab.

The latest development arises out of an alleged dispute between Shoaib Dastagir and Lahore Capital City Police Officer (CCPO) Umar Sheikh. Reports said Prime Minister Imran Khan, in consultation with Chief Minister Punjab Usman Buzdar, approved Dastagir’s removal from the post, making him the fifth officer to be asked to relinquish the office since the PTI government took the reins.

According to the notice of appointment issued by the Cabinet Secretariat on Tuesday, Inam Ghani, a BS-21 officer of Police Service of Pakistan, “is transferred and posted as Provincial Police Officer (PPO) with immediate effect and until further orders”. According to a separate notification, Dastagir will now serve as Secretary Narcotics Control, with the former secretary reassigned as the federal ombudsman. Umar Sheikh will continue as Lahore Capital City Police Officer (CCPO).

The much-debated controversy came to a head on Tuesday with a meeting of the Police Service of Pakistan Chapter where Sheikh offered to tender an unconditional apology to Dastagir. Simultaneously, the issue landed in the office of Chief Minister Usman Buzdar, who assured the police that he will listen to both parties to the alleged dispute.

In the meeting of police officials, chaired by Additional IGP Rao Sardar, Sheikh clarified his position on the ongoing controversy. “I am ready to offer an unconditional apology to IGP Punjab. The IG is my commander and it is my duty to obey his orders,” the CCPO said, adding that he had not disobeyed any orders from him. He said that the IGP had so far issued two orders which were implemented and whatever he said in a meeting of police officers was wrongly conveyed to the IGP. The meeting was also attended by Additional IGP Special Branch, Additional IGP CTD, and the former CCPO.

Meanwhile, Buzdar summoned IGP Dastagir and heard his reservations against the appointment of CCPO Sheikh, a private TV channel reported. According to sources privy to the meeting, the IGP told the chief minister that the CCPO had spoken against his command in a meeting and allegedly ordered police officers to not listen to the Punjab police chief. He also told Buzdar that the CCPO’s attitude may affect the morale of the police force.

Other reports suggested that Dastgir refused to work under the PTI government over the recent appointment of Umar Sheikh as the Lahore CCPO without his consultation, and had asked the chief minister to transfer him to a ‘suitable location’. He was also said to have skipped office on Monday and met with the chief minister in plain clothes, giving the Punjab government the message that he would not accept Sheikh as the CCPO at any cost.

Dastgir had reportedly visited Islamabad on Friday and complained to Prime Minister Imran Khan seeking the CCPO’s transfer, which was turned down. On his return to Lahore, the IGP had refused to work till the CCPO was transferred. Consequently, all scheduled meetings at the IGP office were postponed and Dastgir met the CM on Monday where he had refused to continue on with the post.

Sources said Buzdar had recommended Sheikh’s name to the prime minister for the CCPO slot. After a 45-minute interview, a federal government team sent by the PM had okayed Sheikh’s name, and the PM accorded his final approval during his visit to Lahore on Sept 3. The IG was allegedly not taken on board during the entire process.

Following the change in appointments, while speaking to a private TV channel, Dastagir denied he had expressed any reservations over the appointment of Lahore CCPO, adding that Sheikh had violated the rules as he had spoken against a commanding officer. “I had apprised CM Buzdar about my reservations with Sheikh’s statement,” he said, adding that action should have been taken against the Lahore CCPO then. “I couldn’t continue work until disciplinary action was taken against the Lahore CCPO,” he said.

In a parallel development, Additional IG Finance Tariq Masood, in a letter sent to the Deputy Inspector General of Police (DIGP) headquarters, has said that he will not work under the newly appointed IGP. “I request I be transferred immediately as the new IGP is my junior,” he said, adding that his leave application should be sent to the IGP until his transfer orders are completed. “I have worked in the police force with dignity and always upheld principles,” he added.