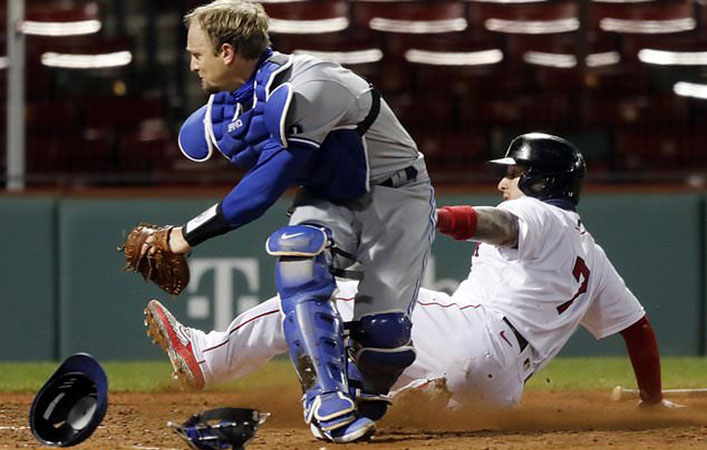 BOSTON: Xander Bogaerts hit a tying homer in the ninth inning and catcher Christian Vázquez manufactured the winning run with his legs, rallying the Boston Red Sox past the Toronto Blue Jays 9-8 on Saturday night.

Bogaerts´ leadoff shot to center field against closer Anthony Bass (2-3) made it 8-all before Vázquez reached on a fielder´s choice with one out. Vázquez, who had three hits, stole second and advanced to third as Caleb Joseph´s throw sailed into center field for an error. Yairo Muñoz hit a dribbler to third, but Travis Shaw´s throw to the plate was off target and Vázquez slid in safely.

The Red Sox have won two straight after losing five of six.

“I thought we did a great job offensively, kept coming back,” Roenicke said. “Busted out early, which has been something that we´ve been wanting to do.”

Vladimir Guerrero Jr. hit a three-run homer for the Blue Jays, and Teoscar Hernández had three hits including a solo homer.

Toronto has dropped four of seven, but still leads Detroit and Baltimore by three games for the second AL wild card.

“Every loss has been tough and every win has been good. They´re all by one run,” Blue Jays manager Charlie Montoyo said. “Today was a tough one. We´ll come back tomorrow and regroup. We´ve done it before. I don´t see why not.”

Guerrero´s homer in the sixth made it a one-run game, and Joe Panik hit a go-ahead double to make it 7-6 in the seventh. Lourdes Gurriel Jr. added an RBI infield single with the bases loaded. Devers homered in the eighth to bring Boston within a run. Martinez hit the first of three Boston homers in a four-run second. Bradley followed with a two-run shot after Vázquez singled, and Dalbec launched a two-out homer to make it 4-1.

“Just a battle for me after the first inning,” said Toronto starter Chase Anderson, who allowed six runs and nine hits in four innings. “(Our) offense really did a really good job of just battling back and giving our team a chance to win, so hats off to those guys.”

Dalbec´s long ball ended an 0-for-14 stretch after he homered for his first big league hit in his Aug. 30 debut against Washington. “I just made a couple tweaks, just timing stuff, and stopped pressing a little bit,” Dalbec said. “Felt good to get that one today.”

Ryan Weber allowed two runs and five hits over five innings in his longest start of the season. Hernández led off the second with a homer to center. Shaw doubled in the fourth to plate Toronto´s second run.

Ken Giles has missed all but two games this season, but the veteran closer is nearing a return as Toronto makes its postseason push. Giles threw live batting practice and will do so again on Tuesday. “To lose him was a big blow, but what this team is doing, somebody picks somebody up and that´s why we´re still hanging in there,” Montoyo said.

With the Red Sox out of the playoff picture, Roenicke said the team will use the final three weeks of the season to look at different players from their alternate training site. “Unfortunately, we´re in a position where we can try some things,” Roenicke said.

Blue Jays: Gurriel and 2B Cavan Biggio were not in the lineup after playing in both games of Friday´s doubleheader. “Trying to keep them healthy, but pretty soon I´m going to say not many more days off after this,” Montoyo said. Both later entered as a pinch-hitters. … SS Bo Bichette (right knee sprain) hit a pair of line-drive singles against Giles and will take live batting practice again Sunday.

Red Sox: RHP Nathan Eovaldi (right calf strain) played catch and will throw a bullpen Sunday. Eovaldi still has no target date for his return, but if all goes well on Sunday, he will throw an “up-and-down” bullpen before Tuesday´s doubleheader at Philadelphia. “We want this thing to be gone first, so we haven´t put a date on it,” Roenicke said.