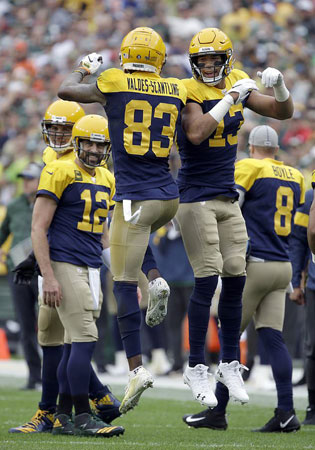 The Green Bay Packers feature one of the league´s most productive and reliable receivers in Davante Adams, who earned his third consecutive Pro Bowl invitation last year. After that, there are plenty of questions.

Green Bay didn´t select any wideouts in a draft that was heralded for its receiving depth. The Packers lost their lone major offseason addition at wide receiver when Devin Funchess opted against playing this year due to the coronavirus pandemic. That leaves the Packers relying on the continued development of younger receivers such as Allen Lazard and Marquez Valdes-Scantling. “I´ve been doubted my whole life, and I´m pretty sure everybody in this room has been doubted,” Valdes-Scantling said Friday. “And we´ll go out and prove everyone wrong again.”

Adams had 83 receptions for 997 yards and five touchdowns last season despite missing four games with a toe injury. His 40 touchdown catches since 2016 are the most of anyone in the NFL. But he´s the only Packer who caught as many as 50 passes or accumulated as many as 500 yards receiving last season.

The Packers remain confident in their receivers, in part because they know Lazard came on strong last season and believe Valdes-Scantling could have a breakthrough year. Valdes-Scantling´s training camp performance has earned the praise of quarterback and two-time MVP Aaron Rodgers. “I would say that the receiver that I´ve been most impressed with, especially the last week, 10 days of camp is Marquez,” Rodgers said Wednesday. “I think he has had some really good practices in a row and started to lay down some good practice fundamentals that he can lean on. At the same time, I know (coach) Matt (LaFleur) said this at one point, this is the new standard for MVS. I´m proud of the way that he´s gone about his business.”

Valdes-Scantling, a 2018 fifth-round pick from South Florida, has a reputation as a deep threat but saw his production drop last season. He caught 38 passes for 581 yards as a rookie, added just 26 receptions for 452 yards in 2019. LaFleur likes the way Valdes-Scantling has responded. “He´s got much more urgency when he gets out there, and is making plays,” LaFleur said. “He´s demonstrating strong, aggressive, confident hands, which is something that, you know, didn´t always happen last year, to be honest.”

His best moment of the preseason may have occurred off the field, as he bought a car as a birthday present for his mom. He posted a video of his mother´s reaction to the gift on his Instagram account.

“I can watch that video a hundred times, and I´ll smile every time,” Valdes-Scantling said. “Just being able to give my mom something that she has dreamt about. My mom works her butt off, and being able to make her dream come true, because she has never asked me for anything since I got into the NFL, or ever. She´s always been the type to give to me or whatever I needed she made it happen, has never asked me for a dollar or anything. So just being able to do something nice for her for a change is huge to me.” The Packers are hoping Valdes-Scantling can make a jump similar to the progress Lazard showed last season. “We don´t get talked about enough, but I think that the guys we have in our room are going to go out and be successful week-in and week-out,” Valdes-Scantling said. “I think we will continue to show that.”