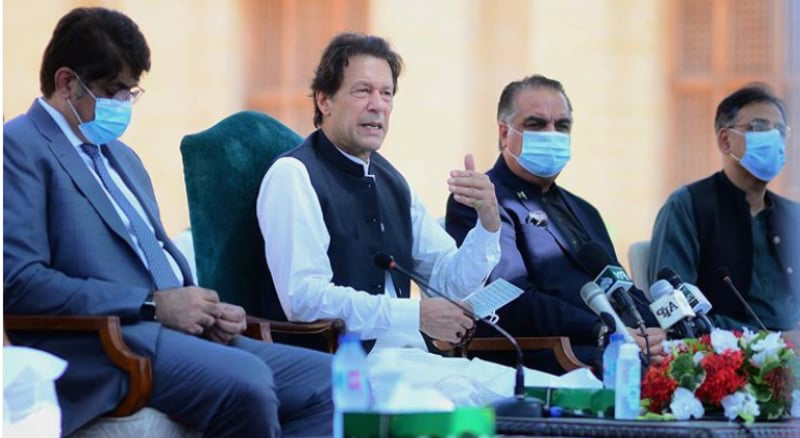 Prime Minister Imran Khan on Saturday announced a historic Rs 1.1 trillion package under the ‘Karachi Transformation Plan’ to resolve the lingering and chronic issues of the port city, including provision of clean drinking water, cleaning of drains, and sewage and solid waste disposal.

Unveiling the details of the plan in a media talk after chairing a meeting, the prime minister said both the federal and provincial governments would contribute to the total package. For better coordination and implementation of the plan, the prime minister said, it has been agreed upon that a Provincial Coordination and Implementation Committee (PCIC) will be set up with all the stakeholders on board to promptly and swiftly resolve the burning issues of Karachi.

As per details, out of total Rs 1,113 billion of the development package, Rs 92 billion would be spent on water supply projects, Rs 141 billion on sewage treatment, Rs 267 billion on solid waste management, storm water drains clearance and resettlement, Rs 41 billion for roads and Rs 572 billion for mass transit, rail and road transport.

Terming it ‘a historic day’ for Karachi, the prime minister said the country was already going through the coronavirus pandemic when it was hit by flash floods triggered by unusual seasonal rainfall. “The floods have hardly hit different areas of Balochistan, interior Sindh and Khyber Pakhtunkhwa, including Swat and Chitral. The country has been passing through another test,” he added.

The prime minister said Karachi also witnessed unprecedented rainfall, which caused devastation and expressed the resolve that they would jointly tackle all the issues. Under the short-, medium- and long-term plans, drains would be completely cleaned, whereas the provincial government has taken the responsibility to rehabilitate the displaced people from the illegal encroachments, he added.

The prime minister said major issues like sewage system and solid waste, transport, circular railway, and roads for Green Line will be fully resolved under the package permanently. He said the residents of Karachi have been passing through ordeals and mentioned that functioning of different civic jurisdictions had created problems in the resolution of the issues. He also lauded the armed forces for their relief and rescue activities in different parts of the country.

Imran Khan stressed that implementation part of the Karachi package will be essential, besides well coordination by all the stakeholders under the PCIC. He said that due to setting up a national coordination committee in the wake of coronavirus, they succeeded in overcoming the pandemic due to well-coordinated efforts put by all the stakeholders, including the provincial governments. Similarly, they responded collectively over the locust threat, which was still looming, he observed.

The prime minister said contrary to Pakistan, the coronavirus pandemic is affecting India very hard impacting her economy. Pakistan has emerged successful in controlling its spread due to total coordinated efforts by all the stakeholders.

Sindh Governor Imran Ismail and Chief Minister Syed Murad Ali Shah, federal and provincial ministers and a number of legislators were also present on the occasion.

The prime minister, in a separate meeting with the delegations of traders and business community, said as the business community played a key role in the national development, it was the government’s responsibility to extend them all-out facilities. He said the government is focusing on automation of business and investment procedures to facilitate the businessmen by addressing their issues quickly and transparently. It was among the government’s priorities to bring ease of doing business in the country, he added.

The members of delegations congratulated the prime minister for adopting a successful strategy to contain the Covid-19 and also appreciated the government for facilitating the business community. The prime minister said a well-coordinated strategy was evolved to cope with the pandemic because it was essential to simultaneously protect the people from the coronavirus as well as ensure consistency of the economic activity. He viewed that the uplift of construction industry and its allied sectors would create employment opportunities. The businessmen also put forward their proposals to enhance exports and tax reforms.