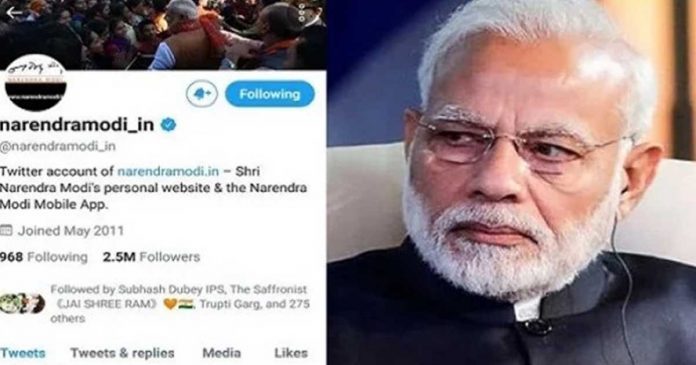 Twitter has itself confirmed the news that it has taken steps to secure the compromised account’. As per the social networking giant, it is “actively investigating” the situation.

A series of tweets were reportedly being sent from Modi’s account asking followers to donate cryptocurrency to a relief fund.

After hacking the @narendramodi_in Twitter account, which is the Prime Minister’s personal website, the cybercriminal reportedly sent out posts seeking donations for the PM National Relief Fund for COVID-19 using crypto currency.

“Yes, this account is hacked by John Wick (hckindia@tutanota.com), We have not hacked Paytm Mall,” another message had said.

On August 30, cybersecurity firm Cyble had said hacker group ‘John Wick’ was behind a data breach at Paytm Mall, the e-commerce unit of Paytm.

This is not the first celebrity account hack case, about two months ago, at least 130 Twitter accounts were targeted in a major cyber-attack of celebrity accounts that included US presidential hopeful Joe Biden, Tesla founder Elon Musk, Barack Obama, Elon Musk, Kanye West and Bill Gates.