September 6: a day of national pride in Pakistan’s military history

* Day is commemorated to revive national spirit, renew pledge to defend country against all threats 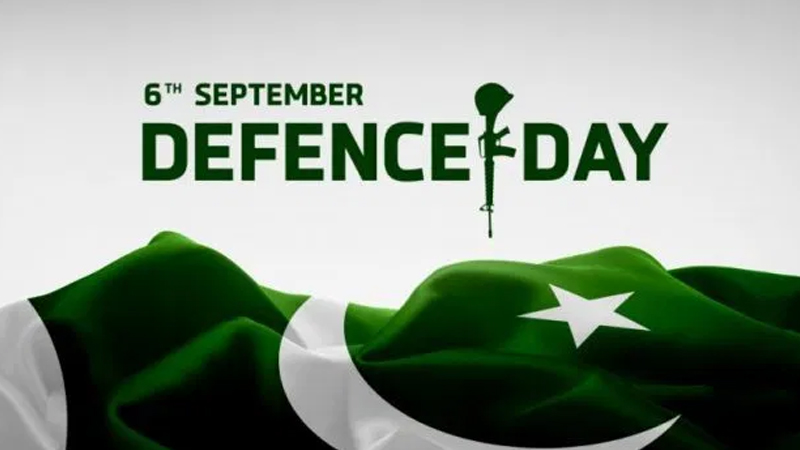 On September 6, 1965, Pakistan faced a grave challenge to the sovereignty and integrity, which the nation and its valiant armed forces met with great courage and determination, defeating the sinister designs of much-larger enemy – India.

Since then, the nation has been observing the Defence Day every year with great zeal, seeking Allah Almighty’s blessing and support for the country’s integrity, prosperity and independence.

The day is commemorated to revive the national spirit and renew the pledge of defending the country against all sorts of threats, paying homage to the sons and daughters of the soil who laid down their lives and endured the vagaries of war in defending the motherland. Fifty-five years back, it was the first full-fledged war with India after a clash in 1947-48 on the core issue of Kashmir, which unfortunately still remained unresolved even after the passage of more than 70 years, besides becoming a nuclear war flashpoint. Later, the two armies also fought in 1971 and 1999 and remained eyeball-to-eyeball several times.

The latest episode took place in February, 2019 when Indian aircraft intruded Pakistani airspace after the Pulwama incident, whom the Pakistan Air Force gave a befitting reply by gunning down its two fighter jets and arresting a pilot.

Initially, the Indian forces intruded Pakistani area in the Rann of Kutch in April 1965, whom was ejected in a sharp and short conflict. Both the armies had fully mobilized, with eyeball-to-eyeball contact. Pakistan proposed cease-fire, India accepted, following which an agreement was signed and the forces were disengaged.

Past midnight on September 5-6, without a formal declaration of war, Indian army crossed the international border and attacked Lahore and Kasur fronts. Pakistan Army and Air Force halted

the attack in its tracks, inflicting heavy casualties on the aggressor.

On September 6-7 night, three teams of Pakistan’s Special Services Groups were para-dropped on the IAF bases at Pathankot, Adampur and Halwara to neutralize them.

at Sulemanki and across Rajasthan and Sindh were also captured in bold and swift attacks.

On the same night, one Corps of Indian Army launched its main effort east of Sialkot with one armoured and three infantry divisions on Pakistan’s extended 15 Division front, screened only by gallant 3 Frontier Force and B Company 13 Frontier Force (Reconnaissance & Support). The 24 Infantry Brigade, led by Brigadier A.A Malik, Hilal-i-Juraat, which was on the move in area Pasrur, rushed 25 Cavalry under Lieutenant Colonel Nisar Ahmad, Sitara-i-Juraat, on 8 September to delay and disrupt enemy thrusts.

As soon as the presence of India’s one Armoured Division was confirmed, Pakistan Army rushed forward to stop the onslaught on a 30-mile front. The biggest tank battle since World War-II was fought on the Chawinda front by 6 Armoured Division , under command 24 Infantry Brigade Groups and valiantly supported by 4 Corps Artillery led by Brigadier A.A.K. Choudhry, Hilal-i-Juraat.

Pakistan Air Force (PAF) support helped turn the tide of the battle. Before a counter offensive by 6 Armoured Division on 22 September could be launched, India asked for cease-fire in the United Nations.

India’s aggression against Pakistan’s international borders without a formal declaration of war, had cost it, apart from heavy personnel, material and economic losses, 1617 square miles of territory as compared to 446 square miles of Pakistan’s open and undefended territory.

Many of our martyred national heroes were given awards for their gallantry and bravery. The highest military award of Nishan-i-Haider was awarded to Major Raja Aziz Bhatti, for his extraordinary role in defending the Lahore Bedian area in 1965.

Where the country’s armed forces proved their mettle, despite being short in number and having limited resources, the whole nation stood by them shoulder-to-shoulder in thwarting the attack.

Pakistan’s artists including Mehdi Hassan, Alam Lohar, Noor Jehan, Saleem Raza and others also played their part and made the whole nation realized that Pakistanis as a nation would not be ill-willed by the designs of adversary. They warmed the hearts and souls of armed forces personnel and civilians with patriotic songs to defend the motherland.