Evening Shadows is an anthology of beautiful poems

* Evening Shadows appeared for the first time in 2004 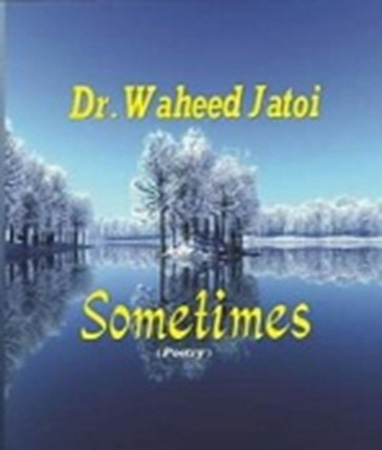 Evening Shadows is the first anthology of poems by Dr Waheed Jatoi. Dr Waheed Jatoi is a prominent poet and litterateur from Sindh and is serving as Deputy Director at Sindhology. He holds a PhD in English literature. The topic of his doctoral thesis is an analysis and evaluation of mystical and philosophical aspects of G Allana’s English poetry. Besides this book, he has authored three other books. Two of them are in Sindhi language, each on the topics of existentialism and poetry and the other one is, like Evening Shadows, a poetry collection titled “Sometimes”.

Evening Shadows appeared for the first time in 2004. It contains short poems, closed form poems, free-verse and an opera titled “The portrait of beloved”. It reveals the poetic genius of Dr Waheed Jatoi. Jatoi sahib is one of those poets who have mastery of the English language and maturity of the thought. While describing the beauty of his beloved he puts in:

“It was magic of her outlook

That made me write this book”

Again, revealing his feelings for his beloved he says:

My worship is my beloved

Who is above every sight!

The poetry makes it clear that the poet is deeply in love with his beloved at the time of composing the following verse:

Let me tell you beloved’s worth

She is Venus on the earth

Life is difficult without her

And is also useless birth

In one of his free verse poems, he shatters the misconception that the shadow is loyal. The poem titled Shadow reads:

That flits before me

when I back onto the

It quits my company

When I face to the

How strange it is!

That it projects from me

Alas! It is not mine

At the time of difficulty

The opera, which is titled as The portrait of beloved, contains the event that takes place at the court of a king. The king has a picture painted by an artist and he wants it to be evaluated by five people. Of them there is each a poet, a painter, a sculptor, a businessman and a lover. The all describe it through their respective professional lenses. I feel an overwhelming compulsion to reproduce all of the verse but in order to keep this article brief, I write few of them here. For example, he introduces the poet as:

I am a poet son of bard

With the secrets in chest yard

People say, “what are you worth?”

You are matchless on the earth!

The sculptor introduces himself as

My is quite a hard labour

I am called, the image maker

Of the Kings and the sages

In the return of daily wages

In the end, the lover starts his assessment of the portrait as:

So is Cupid painted blind

The lover pays tribute as:

I may utter word of use

You are but the Tenth Muse.

It appears after the evaluation of the verses mentioned above that the poet has flair for the foreign language i.e English. He can easily describe scenes and feelings that are difficult to pin down. Thus, this is truly a thing to take pride in that the soil of Pakistan is producing such great poets. I hope and rather expect that Dr Sahib will continue to produce such quality poetry. This might sound irrelevant here but I would like to mention it that Jatoi Sahib composes the poetry with the same quality and flavour in his mother tongue. Moreover, he is a prominent fiction writer too, and has produced a number of short stories too.