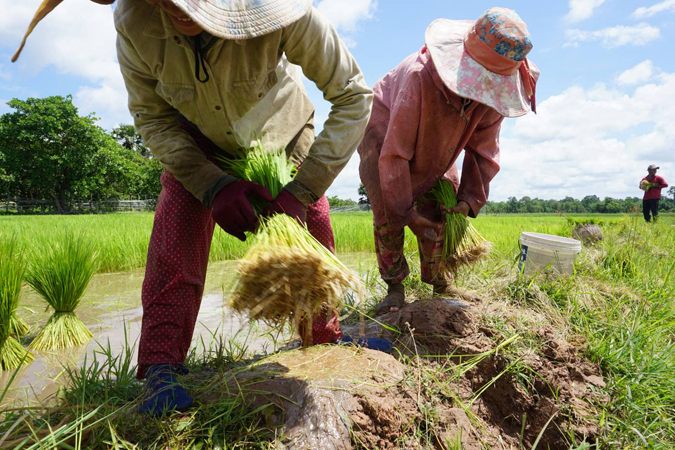 By the end of October each year, the trucks would begin rolling into Tmatboey in the remote northern plains of Cambodia, marking the final sprint among Nhem Siphan and hundreds of rice farmers harvesting their annual cash crop. Buyers would stand over farmers, manipulate scales, understate the quality of crops, or renegotiate after coming to terms, knowing they held all the power in the transaction.

Desperate for cash, some would sell early at basement prices, while those who held out risked missing their one big pay day of the year, Siphan said.

“How many tonnes of rice could I carry by ox-cart? How far is the market? Who do I talk to?” Siphan, 70, told the Thomson Reuters Foundation. “It’s impossible. We had no option but to sell.” For years, farmers supplemented their income by turning trees into ox carts for sale, expanding their rice fields, or hunting endangered animals, all inside the Kulen Promtep Wildlife Sanctuary.

But now rice fields are becoming forest again and species thought lost are returning, under the protection of the same farmers, who have partnered with a social enterprise that pays a premium for their crops.

“My life has never been easier,” said Siphan, sitting under his tidy, stilted home. “All I have to worry about is the weather.” Siphan is one of about 1,500 farmers partnered with ethically-driven Ibis Rice, which guarantees above-market prices to “wildlife friendly” farmers who patrol the forest for poachers and loggers while nurturing chemical-free paddy fields.

The project was established inside three protected areas in northern Preah Vihear province, and is now expanding into illegal logging hotspots in one of the world’s most heavily deforested countries.

“Obviously, we want to work in the places most important for conservation … on the frontiers of deforestation,” said Ibis Rice Chief Executive Nicholas Spencer. “It can be very complicated but in some ways it’s the only answer.”

Cambodia has been beset by disputes over land ownership and forest encroachment since the Maoist Khmer Rouge regime destroyed all property records in the 1970s.

Rice cultivation remains a staple of rural life but with poor market access, farmers have largely missed out despite growing some of the world’s most sought after varieties. After initially struggling to get a foothold in the market, Ibis Rice – which was set up by the Wildlife Conservation Society in 2009 – is set to turn a profit in 2020.

“We are starting to find our niche – with the health conscious, well travelled, international consumer,” said Spencer, outlining plans to double the 1,200 tonnes of rice it bought last year and also move into cashews and cassava. “The problem now is not market, it’s production – training enough farmers to produce enough quality, be certified and follow the rules,” he said.

Sopheak Phearun, an agronomist with environmental charity Sansom Mlup Prey, monitors the health of crops and investigates reports of farmers breaching agreements with Ibis Rice. “It’s tricky. If (farmers) are removed from the programme, we no longer have any way to influence their behaviour,” he said while inspecting a crop reported as diseased.

About 22 farmers were cut loose in 2019, he said, but most returned to the programme in 2020, pledging compliance again.

“If they want to return, they just have to rescind the land they cleared, or stop using the chemicals,” he said.

Srey Ul, a community leader in Tmatboey, said the project had completely changed lives in the village and the environment.