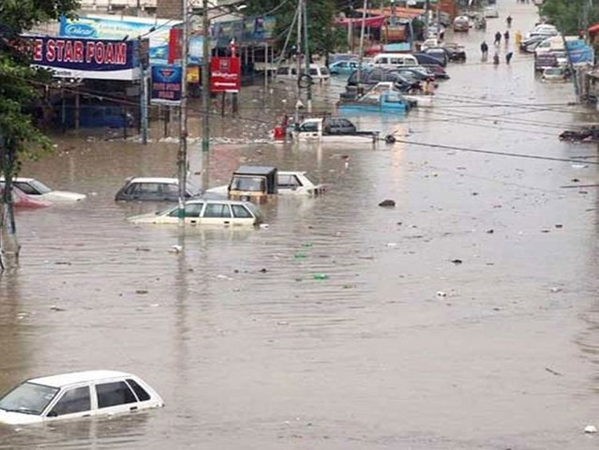 The Sindh government on Saturday declared 20 districts of the province as calamity-affected as five spells of heavy rains played havoc, claiming at least 80 lives, including 47 in Karachi, and damaging public and private properties.

Despite rains having come to a halt, the destruction left in their wake continued to add misery to the lives of citizens, who were still suffering from prolonged power outages and a flooding of their neighbourhood streets. K-Electric chalked up the persistent power cuts in many areas of Karachi to water drainage still remaining an issue in many neighbourhoods of Clifton and Defence Housing Authority (DHA).

On Saturday, after power remained shut, Chief Minister Murad Ali Shah personally went to the CBC and K-Electric offices. He said that the entire Karachi has been declared disaster-struck after various neighbourhoods across the city’s six districts had been surveyed. Shah said experts from the irrigation department and officials from municipal corporations have been dispatched to DHA to drain out areas still waterlogged.

Sharing an update following Shah’s visit, Murtaza Wahab said the chief minister has directed immediate restoration of electricity and drainage of water from DHA areas. “Commissioner Karachi has been directed to provide all possible assistance to DHA,” he added.

The seventh spell of the monsoon season entered the Sindh province on Saturday as Provincial Disaster Management Authority (PDMA) issued an alert of torrential rains in the province in next two days. The fresh spell caused downpour in Umerkot and surrounding areas and is moving towards Karachi and other parts of the Sindh province. The PDMA has, meanwhile, issued an alert to deputy commissioners and other relevant officials, directing them to take measures against urban flooding threat during the fresh monsoon spell.

The met office has predicted rainfall on Sunday and Monday in Umerkot, Sanghar, Badin, Mirpurkhas, Tharparkar and Karachi, the PDMA alert noted while issuing directives to prepare for the situation beforehand. The spell could once again submerge lower parts of the Sindh province, it said.

Meanwhile, at least 19 people, including nine children and three women, lost their lives in various rain-related incidents in different cities of Balochistan during current month. According to a report issued by Balochistan Provincial Disaster Management Authority (PDMA), around 13 people faced injuries due to heavy rains in the current monsoon season in various districts of the province. The report informed that the deaths in rain-related incidents were reported from Dera Bugti, Jaffarabad, Kohlu, Jhal Magsi, Zhob, Kalat, Kach and Khuzdar.