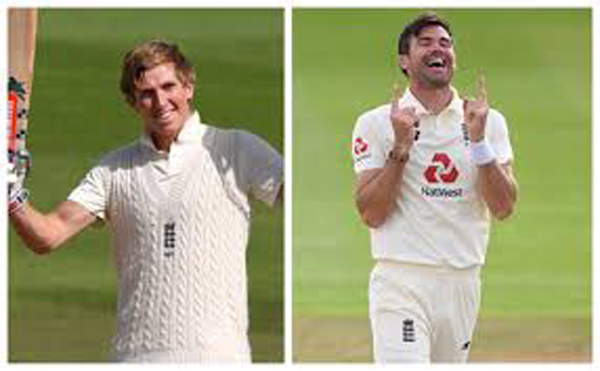 LAHORE: England batsman Zak Crawley’s massive 267 and fast bowler James Anderson’s match haul of seven wickets see the duo shoot up in the latest ICC Men’s Test Player Rankings after the drawn final Test against Pakistan in Southampton. Crawley has ascended 53 spots to reach a career-best 28th position after recording the 10th highest individual score for England and their second highest maiden Test century. He had started the series in 95th position but his 320-run aggregate has made him the fourth best ranked England batsman after only eight Tests, behind Ben Stokes, Joe Root and Jos Buttler. Anderson has moved back to the top-10 after briefly dropping out of it since the preceding home series against the West Indies. The formerly top-ranked bowler has gained six spots to reach eighth position after a Test that saw him grab his 29th five-wicket haul in the first innings and become the first fast bowler to 600 wickets with Azhar Ali’s scalp in the second innings.

Buttler is another England player to make notable progress in the latest rankings update after scoring a fine 152 in his side’s only innings of the Test. He has reached a career-best 637 rating points and 21st position, three off his best of 18th achieved in November 2018. All-rounder Ben Stokes has ceded the top spot for all-rounders to Jason Holder after missing two Test matches, dropping one point behind the West Indies captain. For each Test missed, players lose one per cent each of their batting and bowling points with a cumulative effect of about two per cent on a player’s all-round rating.