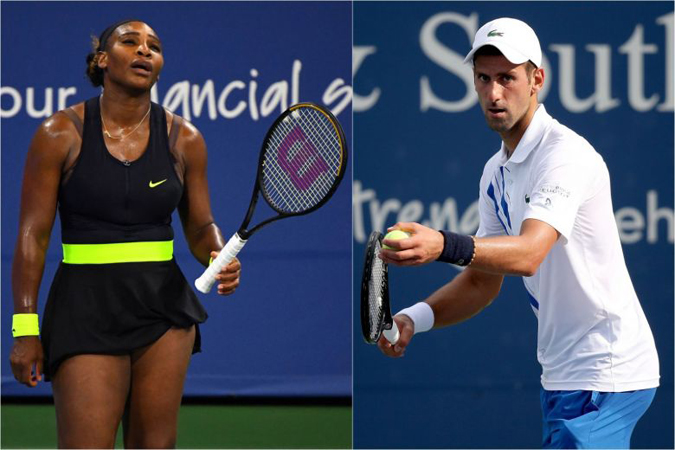 NEW YORK: An out-of-gas Serena Williams crashed out of the Western & Southern Open on Tuesday, losing in three sets to 13th seeded Maria Sakkari 5-7, 7-6 (7/5), 6-1 in New York. The 23-time Grand Slam winner finished with a whimper at the end of the two-hour, 17-minute match as Sakkari clinched the victory with a backhand down the line that a dejected Williams just watched without making an effort to move. At other points in the match, Williams flung her racket into the spectator-less stands and rebuked the chair umpire for slapping her with a time violation. Sakkari, of Greece, advances to the quarter-finals of the no-spectator event where she will face Johanna Konta who cruised past Vera Zvonareva in straight sets 6-4, 6-2. The joint WTA and ATP tournament was moved from Cincinnati to New York where the same quarantine bubble will house the US Open starting on August 31. It was the second straight two-hour-plus match for Williams who at 38 was trying to become the oldest winner of the event. She still holds the record, having won this event in 2015 at age 33. Williams survived a scare in her opening match, prevailing in a two hour, 48-minute marathon over qualifier Arantxa Rus. It was her longest match since 2012.

“It is hard to play the way I have been playing and stay positive,” Williams said. “To play nine hours in a week is too much. I don’t usually play like that. It is all new for me.” Williams made seven double faults and won just 66 percent of her first serve points against Sakkari. After losing the second set in a tiebreaker she tossed her racket over her shoulder into the empty stands behind her. Williams, who has lost her cool at events in New York before, also admonished chair umpire, Aurelie Tourte of France, during a changeover for calling a time violation for slow play. “I am walking all the way to get my towels… I mean, I am getting my own towels. That’s not fair,” said Williams. “You didn’t give me a warning. I am actually a really fast player. Next time you warn me. I’m done.” The ball people usually get the towels for the players but not in the Covid-19 bubble.

On the men’s side, world No. 1 Novak Djokovic won his 20th straight match of 2020 with a hard-fought 6-2, 6-4 victory over Tennys Sandgren. Djokovic, who captured the Australian Open in February, needed six match points to tough out the straight sets victory and reach the quarter-finals of the hardcourt tournament. Djokovic breezed through the final game by winning four straight points, closing it out with a cross-court forehand winner to take it in 88 minutes on Tuesday. “All in all it was a great performance,” said Djokovic. “I felt better and played better than last night. I am going in a great direction.”

American Sandgren, who is ranked 55th in the world, made the Serb work for the victory as he survived five match points in the ninth game of the second set. Djokovic advances to the quarters where he will play German Jan-Lennard Struff, who defeated seventh seed David Goffin 6-4, 3-6, 6-4. Djokovic had pulled out of doubles on Sunday with pain in his neck, but did not appear to be bothered by the injury against Sandgren. “The neck is doing well,” he said.

Also on the men’s side, hard-serving Canadian Milos Raonic routed Brit Andy Murray 6-2, 6-2 and third seeded Daniil Medvedev, of Russia, swept past Aljaz Bedene 6-3, 6-3. In other women’s action, fourth seeded Naomi Osaka rolled over Dayana Yastremska in straight sets 6-3, 6-1 to advance. Osaka, who is the only top 10 player left in the women’s draw, clinched the victory when Yastremska was called for a foot fault while serving on match point. Japan’s Osaka blasted eight aces, won 83 percent of her first serve points and broke Yastremska’s serve four times. Osaka moves to the quarter-finals where she will face Anett Kontaveit, who defeated Marie Bouzkova 6-3, 6-3. Yastremska, who at 20 was the youngest player left in the field, made six double faults and won just 38 percent of her second serves.