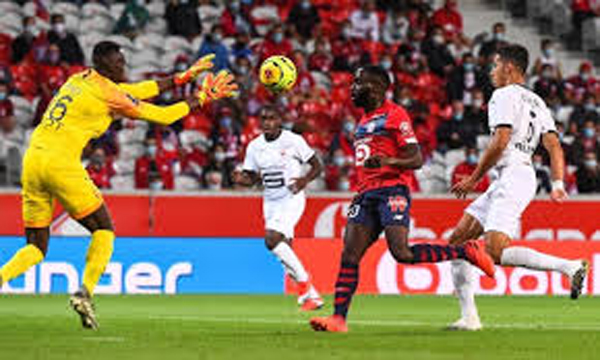 PARIS: Lille were held to a 1-1 home draw by Stade Rennais as both teams finished with 10 men in their first game of the Ligue 1 season on Saturday. The hosts went ahead in the first half thanks to Jonathan Bamba’s strike after Rennes defender Sacha Boey’s red card. Lille’s Reinildo Mandava was then sent off and the visitors levelled after the break courtesy of Damien Da Silva’s goal. Angers got off to a perfect start when Ismael Traore’s first-half goal earned them a 1-0 win at Dijon. The Ligue 1 season started on Friday with a goalless draw between Girondins de Bordeaux and Nantes after a five-month hiatus due to the COVID-19 crisis. Rennes went down 10 when Boey was shown a straight red card for a high foot in the 34th minute, which resulted in the 19-year-old being carried off the pitch on a stretcher after falling heavily on his back. It was the turning point in a poor first half as Bamba fired home a low cross shot from just inside the box – the first effort on target of the game – to put the hosts ahead five minutes from the break. Lille also lost a player on the stroke of halftime as Mandava picked up a straight red card for a brutal tackle on Raiphinha. With new signing Jonathan David failing to make an impact up front, Lille coach Christophe Galtier brought in another recruit, Burak Yilmaz, but the Turkish striker was equally unimpressive. Rennes, who finished third last season, were the better side in the second half and they were rewarded in the 74th minute when Da Silva latched onto Eduardo Camavinga’s headed cross to equalise.