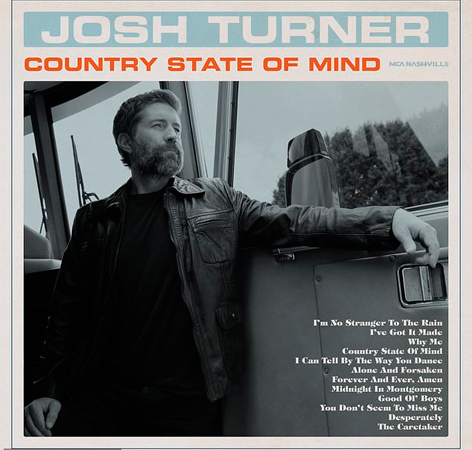 From its title to its songs and sounds, Josh Turner´s “Country State of Mind” is a tribute to his idols and beyond, a compendium of some great country music. Turner is from the genre’s traditional side of the tracks and his voice, naturally deep but capable of taking high flight, makes him an ideal performer for this collection. Several of the tracks have guest performers, including a pair of Turner´s idols, John Anderson and Randy Travis, and there´s a Hank Williams connection to at least a quarter of the 12 tracks. Allison Moorer joins Turner on Williams´ self-explanatory “Alone and Forsaken,” which has a stunning, near-traditional quality that derives from the purity of the melody and the timelessness of the lyrics. Alan Jackson´s “Midnight in Montgomery” relates a visit to Williams´ grave, complete with a sighting of the legend´s ghost. The title track, a big hit for Hank Williams Jr. in 1986, rounds out the Williams trilogy with Chris Janson joining Turner. “Forever and Ever, Amen” is the best-known song on the album. Travis only sings the closing “Amen” this time but it´s his first recording since a 2013 stroke he´s still recovering from and it´s a deeply moving moment. Kris Kristofferson duets on his “Why Me,” a nod to Turner´s gospel roots, and Anderson´s appearance on “I´ve Got It Made” gives the song a double dose of subwoofer-shaking vocals. Maddie & Tae and Runaway June represent Nashville´s newer generations, with Maddie & Tae’s contributions to Bruce Robison’s “Desperately,” a 2004 hit for George Strait, especially poignant.