US presidential elections and Muslim voices for Trump

As the US presidential elections are coming closer, both parties, Republican and Democrat, are racing to reach out to as many voters as they can. Many ethnic political groups are working day and night to make sure that the voice of more than 3.4 million Muslim citizens could be heard at the ballot box. 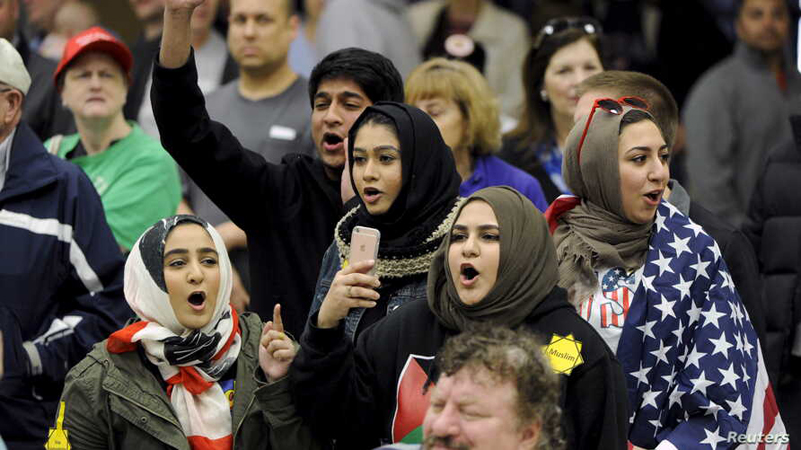 Last week, President Trump’s national campaign launched Muslim Voices in collaboration with Muslims of America who is founded by Pakistani-American Sajid Tarar who is based in Maryland. “Muslim Voices for Trump will energize and mobilize the Muslim community in re-electing President Donald J. Trump by sharing the many successes of the Trump Administration. Re-electing President Trump will ensure the protection of religious liberties, economic prosperity, and educational opportunities for Muslims in America,” according to the website established for the Muslim Voices.

I had an opportunity to conduct a brief interview with the chairman of Muslims of America Sajid Tarar about the role of Muslims in upcoming elections. His concerns seem logical that the American Muslims have put all their eggs in one basket which is the Democrat party. Although Muslim American votes might not make a significant impact on a national scale, they could make a significant difference in several swing states.

Why is it significant to be a part of President Trump’s national presidential campaign?

We are on the table; we are part of a regular campaign and there we can discuss the issues of Muslims especially issues the Pakistani Americans are facing. Being a part of the national campaign of the incumbent president means we have the representation when national and international policies are being discussed. Since we will be part of the mainstream campaign, they will not only listen to us but also make sure we, the Muslims American, have equal opportunities in all government sectors in the next coming four years.

How are you planning to capitalize on this opportunity?

As we all have seen the statistics of economy, stock exchange, and international position of America, these are all on the rise. Things have improved tremendously which has changed the minds of Muslim Americans towards President Trump. Based on the pre-Corona performance of Trump, Muslims are listening to President Trump more closely. Americans are disappointed by the lack of leadership in the Democrat party especially during “Black Lives Matter” protests when they fuel the protest for their political gain. As a result of all these factors, my following has been improved, my messages are being appreciated not only in the Pakistani American community but across all Muslim communities. I am sure I can bring them together to vote for President Trump for a better future of America and the Muslim community.

Where do you think Muslims are lacking in upcoming elections?

The majority of Muslim Americans don’t have a good understanding of the American political system. Most of us are still divided and following our motherland’s parties, like PTI, PMLN, PPP, etc. Most of the Muslim countries either don’t have democracy or it is somewhat controlled or poor form of democracy. Since they didn’t see healthy democratic exercises in their home countries, they don’t participate in local American politics practices. Another reason for lack of interest in American politics is that many of them are still confused about living and raising a family in America. They try to go back to their home country but couldn’t get adjusted and then come back. This cycle of uncertainty keeps on circling among them. We have a large population of Pakistani Americans in New York, but we don’t find even an elected counselor among them or other form representations. On the other hand, we see Syrian and Somalian American Congresswoman, but you could hardly find any elected official who has heritage roots in Pakistan.

What is your message for Muslims, especially the Pakistani American community?

We need to get ourselves together and become part of mainstream American politics. The best way to get started is to work with your local councilman or congressman, go to their meeting, town halls meetings, and do speak for your community. If you vote in every election, they will come and listen to you. If you don’t agree with your local candidate, you can stand up for yourself and run for office.

Two things are very dear to my heart, 1) elections 2) participate in the census. I will request all Pakistani Americans to own these two civic responsibilities so that we are counted, we are heard, and we could get all eligible benefits from the federal and local government.

In my opinion, the Muslim American should have representations in both parties. Even though the majority of American Muslims believe that President Trump hurt their feelings during the 2016 campaign but individuals like Sajid Tarar can play a vital role and work as a bridge among government policymakers and the Muslim community. The Muslim community is going play a bigger role in the coming elections. For example, during the 2018 midterm elections, we saw a 25-point increase in registered Muslim voter turnout in Florida, Ohio, Michigan, and Virginia. As it is predicted in many surveys that Florida and Pennsylvania are going to be swing states again. In Florida in particular, 53% of the state’s 110,000 registered Muslims participated in the midterm election which makes them a game-changer community.