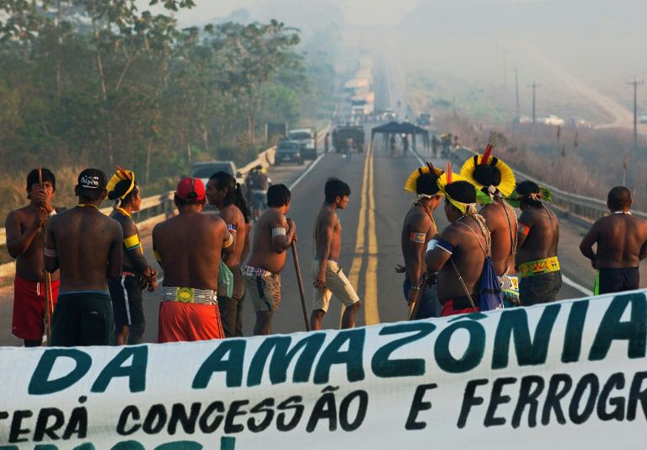 Indigenous protesters in Brazil defied a court order Tuesday and resumed a roadblock of a key highway through the Amazon rainforest, demanding help against the new coronavirus and an end to illegal mining and deforestation.

Brandishing bows and wearing traditional feather headdresses and body paint, dozens of protesters from the Kayapo Mekranoti ethnic group have been blocking highway BR-163 through the Amazon rainforest since Monday morning.

They briefly lifted their roadblock Tuesday afternoon after a federal judge ordered them to allow traffic through.

But they said they were only retreating temporarily for “humanitarian reasons,” since some of the drivers caught in the long line of trucks that formed outside the northern town of Novo Progresso had medical conditions.

Later Tuesday, they resumed their roadblock, vowing to stay put until the authorities agreed to discuss their demands.

“We closed the BR again, and this time we don’t have a date or time to reopen it,” indigenous leader Mudjere Kayapo said in a statement released by the Kabo Institute, an indigenous rights organization.

He said the protesters had no intention of leaving until the federal agency for indigenous affairs, the health minister or indigenous health secretary and a representative from environmental regulator IBAMA showed up.

The highway is an important artery for farmers in Brazil’s agricultural heartland to ship corn and soybeans, two of the country’s main exports, to the river ports of the Amazon and beyond.

She imposed a fine of 10,000 reals ($1,800) a day if the protesters fail to comply, and ordered federal highway police to remove the blockade if necessary.

A lawyer for the protesters is appealing the court injunction, the Kabo Institute said.

The highway, which was built during Brazil’s military dictatorship (1964-1985) to develop the Amazon region, was fully paved earlier this year.

The protesters say the project damaged the surrounding environment, and are demanding compensation.

They also want more help from far-right President Jair Bolsonaro’s government to respond to the coronavirus pandemic, which has hit especially hard among native groups.

In Brazil, 21,000 indigenous people have been infected and 618 have died of COVID-19, according to the Brazilian Indigenous Peoples’ Association (APIB), which accuses Bolsonaro of turning a blind eye to the problem.

Brazil has the second-highest number of infections and deaths in the pandemic, after the United States: nearly 3.5 million and 110,000, respectively.

The protesters are also demanding the government act to stop encroachments on their land by illegal gold miners and deforestation in the Amazon, blamed mainly on farming and ranching.