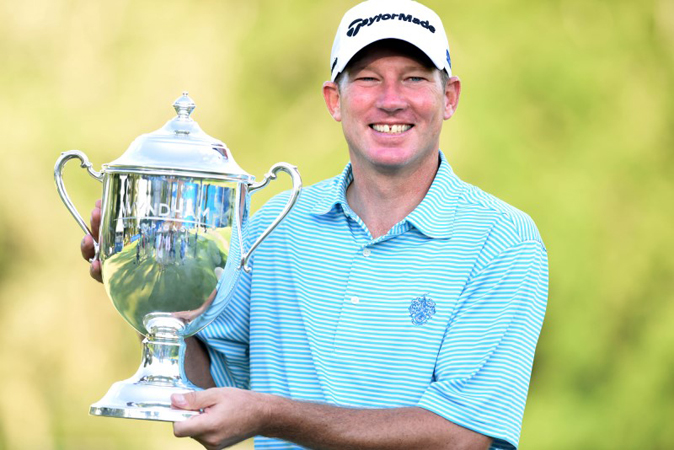 NEW YORK: Jim Herman capped off a superb weekend of play with a win at the Wyndham Championship on Sunday, shooting a seven-under par 63 in the final round of the Greensboro, North Carolina, tournament. Herman, who started the day tied for fifth after carding a nine-under 61 in Saturday’s action, kept his hot streak going at Sedgefield Country Club, firing two birdies and an eagle in the first five holes of the final round. “Obviously you don’t expect 61 or 63 on a regular basis, but when you need it, there was nowhere else to go but deep,” said Herman, as he picked up his third PGA Tour win in a little over four years. “Best golf I’ve played in my life obviously.” Runner-up Billy Horschel, who carded a five-under par 65, saw victory slip through his fingers after bogeying on 16 and missing a birdie putt on 17, ultimately sparing Herman from a playoff after a near-miss putt for birdie on 18. The 42-year-old Herman, who didn’t pick up his first PGA win until he was 38, said “you’ve got to play like everything’s on the line” on the Tour. “Outside of a few wins by the old guys in their 40s, it’s a young man’s game, so it’s nice to compete and show you can do it,” he said. Kim Si-woo, the leader heading into the final round after sinking a hole in one on Saturday, finished tied for third at 18-under after carding an even-par 70, along with Americans Kevin Kisner (64), Doc Redman (68) and 2012 U.S. Open champ Webb Simpson (65). The Wyndham Championship was the final event of the PGA Tour’s novel coronavirus-hit regular season.