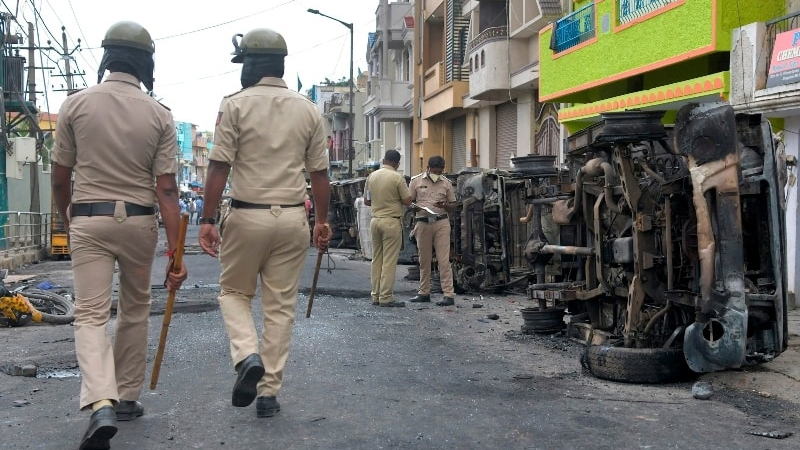 At least three people were killed in India’s IT hub Bangalore after an anti-Islam Facebook post sparked riots and resulted in clashes between police and thousands of protesters.

According to Times of India, the violence, that erupted at 7pm on Tuesday, went on for hours. The report stated that 110 others had been arrested as of Wednesday morning. The report added that the violence erupted after a close relative of a local lawmaker, Congress MLA Akhanda Srinivasamurthy, made a derogatory post about Holy Prophet (PBUH) on the social media site. The post has since been deleted.

Reacting to the post, a mob gathered outside the lawmaker’s house and set two cars on fire. Police confirmed that Muzamill Pasha and six others from the Social Democratic Party of India (SDPI) were also detained for questioning, the publication said.

Bangalore Police Commissioner Kamal Pant wrote on Twitter that the lawmaker’s relative had been arrested for the post, along with about 100 others for rioting and arson, and the situation was now under control. At least 60 officers were injured the previous evening as a furious crowd attacked a police station and set vehicles on fire. Local media images showed protesters trying to barge into the police building and shouting slogans outside the politician’s home.

Police opened fire with live ammunition and tear gassed the violent crowds. Three people were critically wounded during Tuesday’s violence and at least one reporter was injured, police told AFP.

The TOI report added that protesters had demanded that the lawmaker’s relative be placed under arrest, who had later claimed that his Facebook account had been hacked and he did not post the objectionable content.