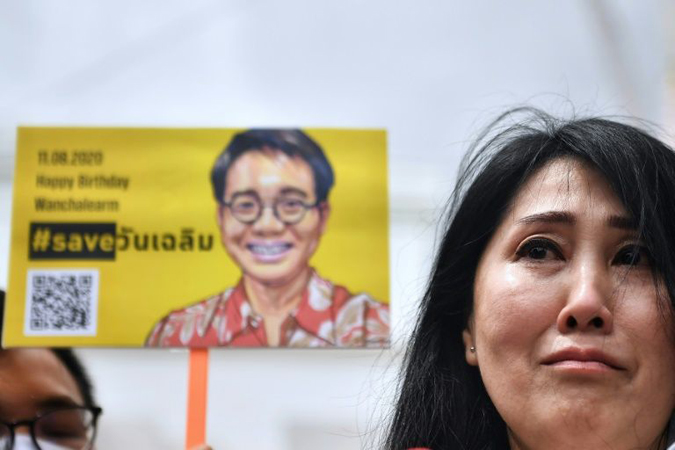 The family of a missing Thai pro-democracy activist celebrated his birthday Tuesday, vowing not to give up hope for his return more than two months after he was allegedly abducted in Cambodia.

The disappearance of Wanchalearm Satsaksit was one of the catalysts for a growing pro-democracy movement in Thailand, which has seen thousands turn out to protest the military-aligned administration.

Wanchalearm, a critic of the Thai government led by former army chief Prayut Chan-O-Cha, was abducted off the streets of the Cambodian capital Phnom Penh in early June, according to rights groups.

The self-exiled activist, who runs an acerbic anti-government Facebook page, is wanted by Thai authorities for allegedly breaching the Computer Crimes Act.

Both Thai and Cambodian authorities have vowed to investigate his disappearance, but sister Sitanan said Tuesday — his 38th birthday — that she was “frustrated” with the slow pace the investigations have taken.

“Our family is waiting for the truth and clarity from both countries,” she said, as she lit candles on a cake in front of the Cambodian Embassy in Bangkok.

“I still have faith that he’s alive… We cannot give up hope if there is a small chance,” she told AFP.

Protesters in rallies across the country have held up posters with Wanchalearm’s face to demand answers of his fate. Sitanan said she was “proud” that her brother has become a symbol the movement, adding that she didn’t used to understand why he was so active in the pro-democracy movement. “On the day he disappeared, that’s when I realised we needed to do something about the politics of Thailand,” she told AFP. Since a coup in May 2014, Thailand has vowed to track down pro-democracy critics — especially those accused of attacking the unassailable monarchy.