* Sherpa, which Sir Jim named after its huge carrying capacity, is one of the smaller members of his fleet, with the
Hampshire II — worth £115 million — being 258ft 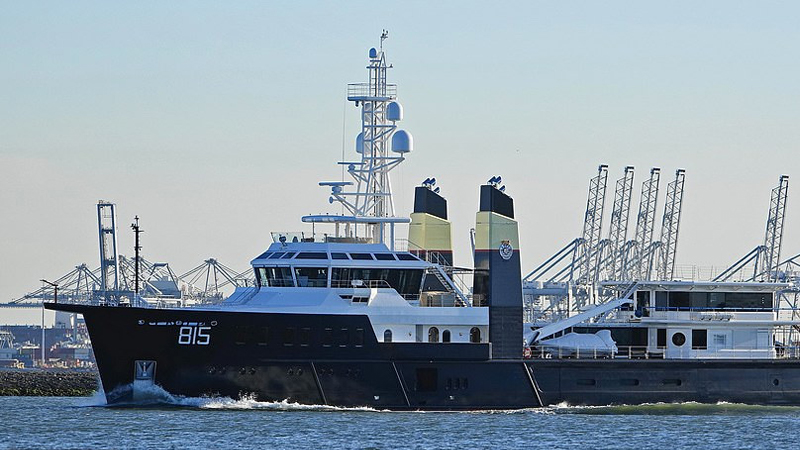 Falmouth Harbour turned into a superyacht playground today as Sir Jim Ratcliffe’s luxury vessel and a ‘floating palace’ that ‘belongs to the Qatari royal family’ joined hundreds of thousands of staycationers in Cornwall.

The billionaire financier’s £91million, 243ft expedition ship was dwarfed by the Emir’s £200million, 410ft monster as they docked near the 644ft cruise liner The World – in a trio thought to be worth £800million.

Sherpa, which Sir Jim named after its huge carrying capacity, is one of the smaller members of his fleet, with the Hampshire II – worth £115million – being 258ft. But Sherpa was custom built for him in 2018 by London-based brokers Cecil Wright & Partners so could travel to extreme locations across the world. Despite its practical purpose – featuring a huge crane and large storage facilities – it is still equipped with a helipad, two VIP suites, four guest cabins and a bar and dining area.

Meanwhile Katara is a secretive luxury vessel which was built for Qatar’s previous Emir in 2010 and is still believed to belong to the family.

Tourists and locals watched it glide past the twin castles of St Mawes and Pendennis before it berthed in the harbour last night.

The ship, which is one of the largest of its kind in the world, dropped anchor next to the two other boats as they towered over St Anthony’s Lighthouse.

Falmouth is among the hotspots in the South West that have seen a surge in holidaymakers in recent weeks as Britons opt for staycations rather than going abroad.

It comes amid fears a fresh stampede of revellers to beauty spots as the country is set to be roasted by a ten-day heatwave, with nearly 20million planning to go on a holiday at home rather than abroad this year. Katara is shrouded in secrecy and even as she approached Cornwall last night her automatic identification system was switched off. It is widely thought she belongs to the Qatari royal family, but owner’s identity is unknown. Yacht enthusiasts speculate it is the property of current Emir of Qatar Tamim bin Hamad bin Khalifa Al Thani or Sheikh Nawaf bin Jassim Bin Jabor Al-Thani, who is chairman of the Katara Hospitality Group.

Katara, which was built in Germany at the Lurssen yard in 2010, features a helicopter deck, an array of satellite communication domes, various tenders and jet skis.

The 7,922-tonne superyacht also has a beach club, swimming pool, a gym and spa, on-deck hot tub as well as speculation of a main saloon that towers over two decks.

She has two 9,925 hp engines giving her a top speed of around 20 knots, but she generally cruises at about 15 knots.

As for her name, since the year 150AD, ‘Catara’ was the first and most ancient name designated for the Qatar Peninsula on maps.

The name spelt with a ‘K’ appeared on documents in the early 18th century and was written ‘Katara’ – instead of ‘Catara’ – on French maps of the area. The vessel was built for the previous Emir of Qatar, who is the father of the current Emir, and sails under the Qatari flag. Her home port is Doha, the country’s capital, and she is scheduled to leave Cornwall tomorrow according to the Falmouth Harbour Commissioners’ website.

Katara offers accommodation for up to 34 guests and can carry up to 95 crew members on board, according to Yachtcharterfleet.com.

The website says: ‘The 124.4m custom motor yacht motor yacht ‘Katara’ was built by Lurssen in Germany at their Lemwerder shipyard, she was delivered to her owner in 2010. The yacht’s interior has been designed by Alberto Pinto.’

Charterworld.com adds: ‘Her impressive naval architecture was designed by the Lurssen in-house naval architects, with the exterior design by the world renowned designer Espen Oeino. ‘Katara megayacht was launched in April 2010. She features a steel hull and aluminium superstructure, carrying the hull number 13656. As her name suggests, the motor yacht Katara is flying a Qatar flag.’

The biggest yacht on the planet is the Azzam, which is 591ft and worth an estimated £411 million. It is thought to be owned by the royal family of Abu Dhabi.

Second on the mega list is the 533ft, £342million Eclipse, which belongs to Chelsea foobtall club’s Russian owner Roman Abramovich. Meanwhile southern England will melt in 99F (37C) temperatures by the weekend as the Met Office issues a level three heat health alert – but rain today hit northern parts of the country as well as Scotland.

The scorching air from Europe at the end of the week will come after the wet weather that has lashed the North West clears by tomorrow.

The Met Office put out a yellow weather warning for north of the border today as west Scotland – including Glasgow and Stirling – was drenched. 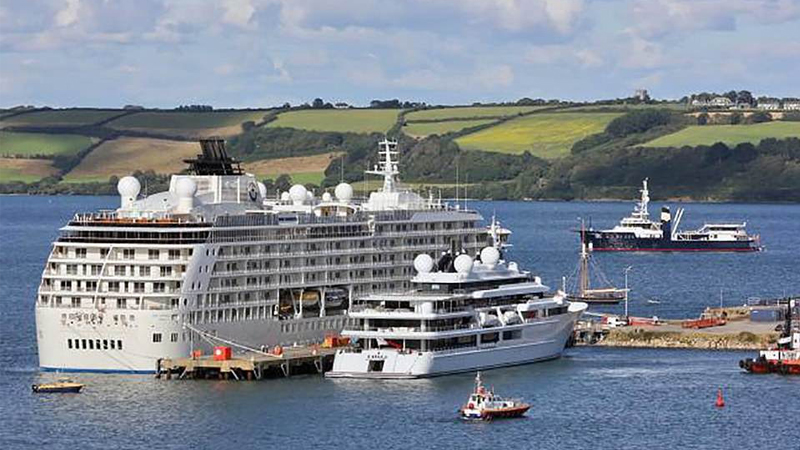 The heat from the Continent is due to be carried on southerly winds across the majority of England, meaning hot and dry conditions for many.

Temperatures could peak at around 32C for the south of England on Thursday and 26C in the north of the country. While the Bahamas, in the Caribbean, could be as hot as 31C on Friday, the Met Office has said temperatures in England could reach 37C.

Casablanca, in Morocco, is due to see highs of 27C on Friday, by comparison. While Lisbon has seen recent hot weather, it is expected to have peaked by the weekend with temperatures around 30C.

Although the hot spell is due to last throughout Saturday, the temperature is due to drop and by Sunday some parts of the country could see thunder storms. The Met Office has also issued a heat health alert for the south east of England and warned UV levels could be high in some parts.

High temperatures on Saturday could see heatwave conditions being met in southern and the south east of England. Bonnie Diamond, a forecaster for the Met Office, said: ‘It’s a bit of an unsettled start in north western parts but for the southern half of the country, it is a dry first half of the week. ‘The heat turns up from Thursday with warmer weather across the whole of the country. ‘It will be really quite hot across parts of the south east of England where we expect to see temperatures in the low to mid-30s, with the peak of the heat on Friday.

‘Southerly winds across England are going to bring warm air over from Europe and further south it is going to be hot. ‘Temperatures in England and south Wales will be in the high 20s and low 30s.

‘By Friday, we will be seeing the hottest of the spell with temperatures widely over 30C. ‘There will be a focus of temperatures reaching around 34C to 35C in the south east and we are going for a maximum of 37C on Friday in the south east of England. ‘Saturday looks to be very warm or hot for many, although not quite as hot as Friday. Sunday we should have sunshine to go along with the temperatures. There is a possibility of thunder storms for some part of the country.’

Met Office Chief Meteorologist Frank Saunders added: ‘Most of us will see a spell of warm, summery weather later this week, with hot weather developing across southern parts of the UK.

‘From Thursday temperatures will be in the low- to mid-20s Celsius for Northern Ireland, Scotland and north Wales, but it will be much warmer across southern and central areas, with temperatures widely reaching around 30 Celsius, possibly 32 Celsius in the southeast of England.

‘It’ll be another hot day on Friday with temperatures widely reaching 30 Celsius, or higher, in central, southern and some northern parts of England.

‘It is likely to be hotter still in southeast England where 34 to 37 Celsius is possible.

‘Saturday will likely be another hot day for southern and central parts of the UK, with heatwave conditions possibly being met in parts of southern and southeast England.’

It follows a weekend of hot weather which saw some of England’s most popular tourist hotspots deluged with visitors.

The Met Office confirmed last Friday was the third hottest day since records began in 1910, after 37.8C was recorded at London’s Heathrow Airport.

There are fears Cornwall could face being locked down as locals blast holidaymakers for not wearing face coverings or respecting social distancing.

The county’s narrow streets have been flooded with tourists and the local council was forced to deploy street patrols to reprimand rule breakers.

Deputy Leader of Cornwall Council Adam Paynter warned a local lockdown – as seen in Leicester and parts of the North West – would spell doom for the staycation season.

He told Cornwall Live: ‘I urge all visitors to Cornwall to follow guidelines such as washing hands, wearing a mask when required to and maintaining a social distance. ‘We want to avoid the local lockdowns that have happened further north that have seen places shut down and we want to make sure the attractions stay open for local and visitors to enjoy and don’t want to see anything closed and the best way to achieve that is if people do all they can to follow the rules to avoid spreading the coronavirus. If they do that, they’ll remain open.’

He added: ‘Just because you’re on holiday it doesn’t mean you can just forget everything. There have been reports that some people when refusing to wear a mask have said they’ve come down to Cornwall to get away from it as if the coronavirus doesn’t exist in Cornwall when it does. People need to be sensible and follow all the guidelines.’

Nearly 20million Britons plan to go on a staycation holiday in the UK this year, a poll found this week, amid fears over a fresh stampede of revellers to beauty spots. Tourists are expected to flock back to beaches across the country as temperatures up to 37C sweep in from central Europe by the end of the week amid a level two heat warning.

A YouGov poll found 28 per cent of Britons plan to take a holiday in the UK this year. It is the equivalent of about 19million people.

Meanwhile only 9 percent will go abroad and a further 49 percent do not intend on holidaying.