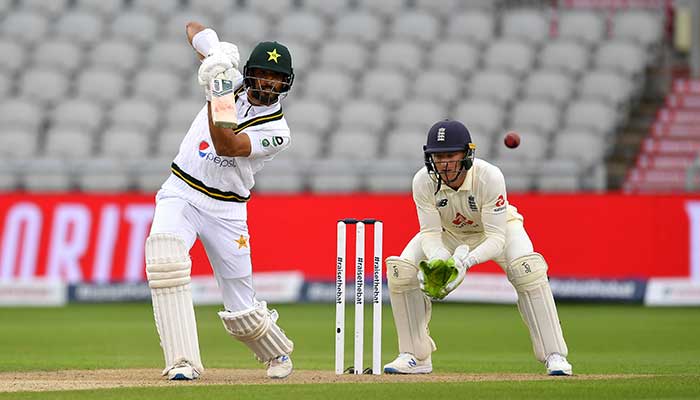 MANCHESTER: Head coach Misbah-ul-Haq said Shan Masood had “proved himself in England” after the Pakistani opener’s maiden ton against the hosts placed Pakistan in a commanding position in the first Test at Old Trafford on Thursday.

Masood’s Test-best 156 was the cornerstone of Pakistan’s first-innings 326 all out, with England slumping to 12-3 in reply.

The hosts ended the second day on 92-4 — a deficit of 264 runs — with star all-rounder Ben Stokes out for a duck and England captain Joe Root falling for 14.

Masood batted for nearly eight hours in difficult conditions and in the process joined Misbah and team batting coach Younis Khan as one of just six Pakistan batsmen to have scored a hundred in three consecutive Test innings.

This century following Masood’s 135 against Sri Lanka in Karachi in December and 100 against Bangladesh in Rawalpindi in February.

Masood stood firm in Manchester even though he was twice reprieved by Jos Buttler on 45, the wicketkeeper dropping a catch and missing a stumping off spinner Dom Bess.

“It was an excellent performance by him, especially against a seam attack of (Stuart) Broad, (James) Anderson, (Chris) Woakes and (Jofra) Archer, and against an off-spinner (Bess) that was bowling well on a pitch where there was turn,” said Misbah of the English-educated Masood’s fourth hundred in 21 Tests.

“It was good application and his hard work has paid off.

“Now he has proved himself here in England, so I’m really pleased, especially as it’s not (just) a hundred, (but) a big hundred.

“Still, we would have been in trouble if he only scored a hundred. But hundred-and-fifty plus, and through the innings, that was really special.”

A good day for Pakistan got even better with Stokes clean bowled for nought by Mohammad Abbas during a slump that had the hosts three down inside six overs.

Abbas also removed opener Dom Sibley on his way to close figures of 2-24 in seven overs, with towering left-arm quick Shaheen Afridi making the initial breakthrough with just the fourth ball of the innings when Rory Burns was plumb lbw.

“I’m so happy – it’s crucial for you to take wickets with the new ball especially when the game is like this and you are playing with just 326 runs on the board,” said Misbah.

Ollie Pope was 46 not out at stumps, with Buttler unbeaten on 15.

Archer, who took 3-59, backed the fifth-wicket duo to stage a recovery.

“I rate Jos highly, he’s a very talented batter and there’s no doubt him and Popey can dig us out of a hole and put on a really big partnership and swing the momentum in our favour,” said the fast bowler.

The day started brilliantly for England when, with Thursday’s sixth ball, James Anderson had Babar Azam edging to first-slip Root for 69 without Pakistan having then added to their overnight 139.

But the resolute Masood remained and received excellent support from Shadab Khan (45) in a stand of 105 after Pakistan had been struggling at 176-5.

Pakistan managed just 48 runs for the loss of three wickets in Thursday’s first session to reach 187-5 at lunch.

But with five overs until the new ball, Root then bowled his own occasional off-breaks in tandem with Bess immediately after the interval.

Masood and Shadab responded by adding 27 in those overs as they ran England ragged.

Shadab holed out off Bess but Masood cruised through the 90s, with two late-cut fours off Broad taking him to 96 before he completed his first Test hundred against England.

Playing a textbook opener’s innings, he then upped the tempo by hoisting and driving Bess for two sixes.

Masood eventually fell lbw after tea to Broad, having faced 319 balls in an innings that also included 18 fours.