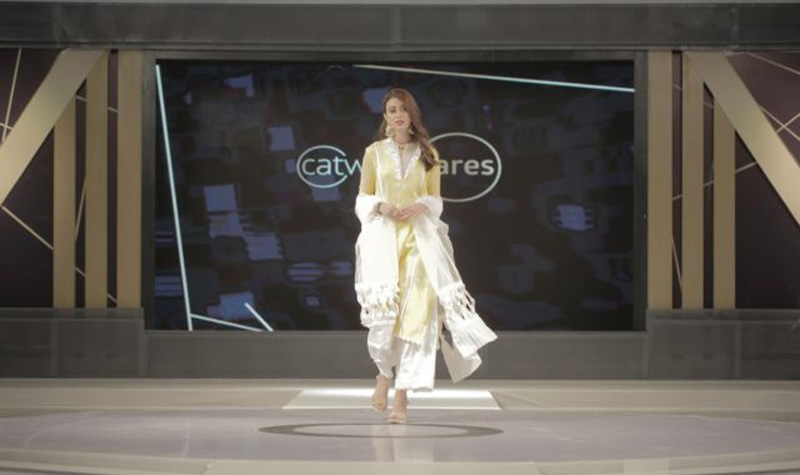 The ambience was perfectly produced akin to any other fashion week outside of the Covid-19 pandemic except here there was no riveted audience present and instead the bleachers were eerily filled with empty wooden benches.

Welcome to Pakistan’s first ever virtual fashion week – a precursor and a learning-curve- prequel for fashion weeks in the near future – whose Day One was successfully recorded on Tuesday for later virtual transmission. Catwalk Cares Virtual Fashion Show Season 2 will air on ARY Zindagi TV worldwide into 3days format and on ARY Digital for its YouTube transmission under the aegis of ARY as the Official Media Partner on this Independence Day.

“I have to thank and give credit to my friend Asadul Haq for suggesting to present Catwalk Cares Season 2 on a ramp. It was his idea not mine. This time we faced a myriad of challenges including a change of venue during our initial recording during EID due to not obtaining a NOC and then having to create another set elsewhere while keeping designers calm and engaged,” explained Frieha Altaf. CEO of Catwalk Event Management & Productions. Those who were in attendance though were a selected number of Media including leading bloggers who attended the show recordings at different time slots in order to follow the stringent SOPs. Likewise, designers and brands along with their models were also assigned separate intervals so as to avoid crowding.

“Participants were instructed to wear masks, keep a social distance and keep on using hand sanitizers when off camera and continuously urged to remain safe'” explained Altaf about the strict safety measures enforced during the recordings.

Likewise, Catwalk Cares Season 2 is proud to bring on board Chocolatto as its Presenting Partner; FM 89 as its Radio Partner; KFC as the Official Food Partner; Aquafina as the Beverage Partner and Douxo as the Official Hair Partner, SABS Salon is the official Makeup and Hairstylist while Samiya Ansari of SABS is the Wardrobe Stylist and fashion editor who will help guide and oversee looks.