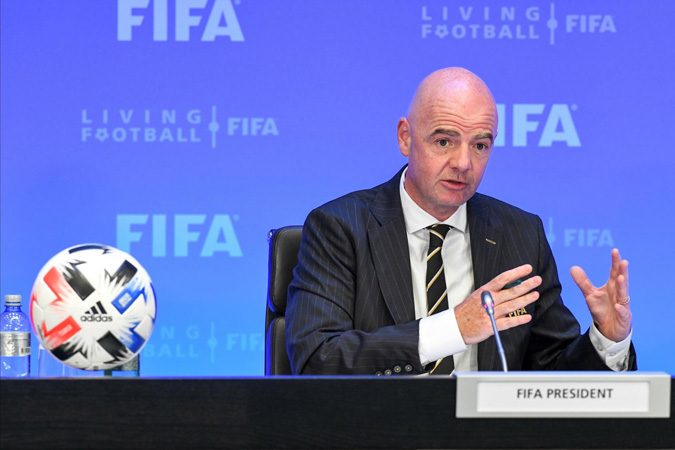 LAUSANNE: FIFA president Gianni Infantino will “respect any decision by the ethics committee”, world football’s governing body said Tuesday after Swiss authorities opened criminal proceedings against him last week. A Swiss special prosecutor has launched proceedings against Infantino, as part of an investigation into suspected collusion with the country’s attorney general, Michael Lauber. Both have denied any wrongdoing. “I’ve no doubt that Gianni Infantino would respect any decision by the ethics commission,” FIFA deputy secretary general Alasdair Bell told a video news conference. “We don’t see any evidence of criminal or unethical behaviour,” he said.

FIFA on Sunday insisted Infantino would continue to fulfil his duties as president and blasted the Swiss probe. It gave no indication on Monday whether or not its ethics committee had instigated proceedings against Infantino. “The ethics committee will have to come to its own conclusion… In every case, it needs to be tested, if there’s something serious, there’s a case for suspension,” said Bell. Questioned about Infantino’s absence during Monday’s video conference, Bell said the FIFA chief “will be available and will speak in order to clear his name.” He added: “FIFA and Gianni Infantino have absolutely nothing to hide, we want to be transparent. There’s no factual basis for this criminal procedure.” Infantino and Lauber are said to have held a series of meetings in 2016 and 2017. Two such meetings were initially exposed in 2018 by “Football Leaks”, a cross-border investigation by several European news organisations.

In a statement Thursday, Swiss authorities said special prosecutor Stefan Keller “has reached the conclusion that…there are indications of criminal conduct” in relation to meetings between Infantino, Lauber and another official, Rinaldo Arnold. “This concerns abuse of public office, breach of official secrecy, assisting offenders and incitement to these acts,” the authorities said. Lauber, who offered his resignation on July 24, was in charge of Switzerland’s probe into the towering corruption scandal that exploded at the heart of Zurich-based FIFA in 2015. But he was forced to recuse himself from the investigation in June 2019, following media revelations that he had held several undeclared meetings with Infantino during the probe.

Switzerland has pursued a number of cases since a raid on a luxury hotel in Zurich in May 2015 led to the arrests of a several FIFA executives and exposed an allegedly corrupt underbelly in world football. In total, more than 20 FIFA proceedings have been opened in Switzerland over the past five years into allegations of corruption and vote-buying, and allegations over the awarding of television rights contracts.