Abrogating the articles 370 and 35A on August 5, 2019, the BJP government dismantled the fate of Kashmiris; further denying them the right to self-determination. 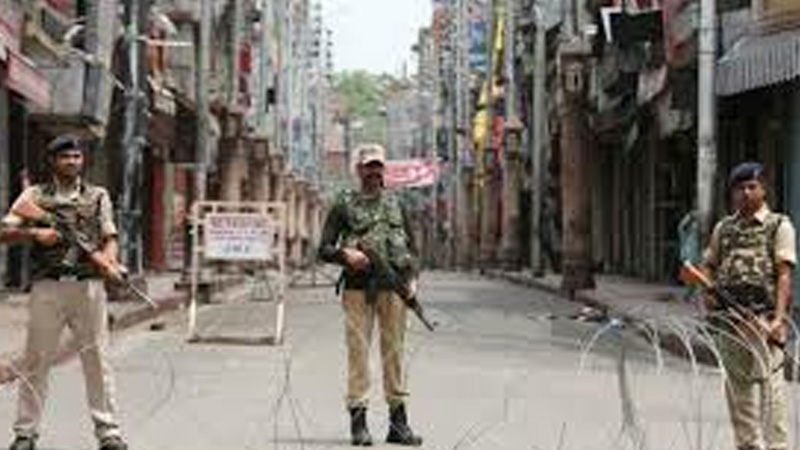 Indian annexation of Jammu and Kashmir territory is classified as occupation, which, by all means, is an illegitimate action under international law that prohibits the occupant states from annexing any contested territory unilaterally and changing the nature of a disputed territory. Jammu and Kashmir dispute is not only of land, but also the issue of illegal occupation of humans, and violations of the Kashmiris’ political, economic, ideological and basic rights.

India’s forceful and illegally occupation of Jammu and Kashmir has left the Kashmiris to brutal Indian aggression exemplifying itself in the form of genocide, enforced disappearances, extra-judicial killings, torture, staged encounters and organised dishonouring of women, including rape and sexual abuse, along with arbitrary arrests of innocent Kashmiris facing an unknown cruel fate for decades to come. For the past 73 years, the volatile territory of Jammu and Kashmir is witnessing the presence of heavy Indian militarily deployment. With thousands of troops patrolling the streets barbed with wires, deserted looks of educational institutions, communication blackout, restricting the movement of people and press all across Jammu and Kashmir; India has sieged Kashmir political and economic autonomy.

Apart from the disturbing political and strategic outlook of the region, the fallout of the double lockdowns severely affected Kashmir economy. The lockdown after another owing to COVID-19 stalled the already fragile economic activities and destroyed the local industries with its repercussions evident on tourism, agriculture and cottage industries of Jammu and Kashmir. The lockdown continues, and ambiguity still looms large in the stormy horizon that has intensively damaged the socio-economic fabric of the region. According to Aljazeera report, Kashmir Chamber of Commerce and Industries estimates that the region’s economy is being lost around US$ 20 million every day that on top of US $2 billion economic hit in the second half of 2019. “This added to estimated losses of another Rs 13,200 crore during the 49 days of the COVID-19 lockdown till May 12.”

The economy of Jammu and Kashmir continues to bleed “with over 12 crore jobs lost and widespread bank defaults.” The business resources and average savings of households are diminishing severely. The economy of Jammu and Kashmir is consumption-driven “with 23 per cent of its 44 lakh labour force is deriving its livelihood from the trading sector and another seven per cent from the transport sector.” Owing to draconian military curfew, “double whammy of nested lockdowns” and communications blockade, the breathing space of these labour-intensive sectors has been chocked. Daily wages workers are the most affected as both lockdowns leave them unemployed for an indefinite period.

Rather, the inhumane actions of the Indian government have not only put the livelihood of 125.41 lakh Kashmiris at stake but have also disturbed the Indian economy, which itself relies on commodities manufactured in Jammu and Kashmir for its exports. The trade and investment activities are halted and the conditions continue to worsen with no Foreign Direct Investment, along with negligible imports and exports coming in and going out from Jammu and Kashmir. Deteriorating economic conditions, paralyzed transport and empty hotels have left the locals in a miserable condition.

Tourism is a predominant feature of economic development in the contemporary world, which stands completely ruined in Jammu and Kashmir by the clampdown. “The streets are deserted and devoid of the tourist business, which has supported up to 700,000 local Kashmiri people.” A brief glance at empty “shikaras, vacant houseboats and deserted hotels presents a grim picture” of the tourism sector. The abrogation of articles and the double lockdowns have hit not only tourism but also the allied sectors involving the once-thriving cottage industry of Kashmiri art and craft being the only indigenous means of livelihood for a large segment of Kashmiri population.

Moreover, the agriculture sector has also seen a decline for the primary reason of double lockdown, which is the mainstay of the people as it provides employment directly or indirectly to ”about 70 per cent” of total Jammu and Kashmir’s population. With the imposition of curfew, apples — contribute “around 12 to 15 per cent” of Kashmir’s economy — have been waiting to be plucked from the trees.

Jammu and Kashmir is in the complete siege of Indian forces, turning the territory into a huge human jail. The siege is continuously haunting the conscience of humanity. The international community should realize the seriousness of Indian atrocities on humanitarian grounds. It ought to exert pressure on the Indian government to stop the bloodshed of the innocent Kashmiris; upholding the United Nations Charter with obligations under international humanitarian laws and implement UN Security Council Resolutions on Jammu and Kashmir. Being an occupying state, it is an Indian obligation to restore normalcy, ensuring the provisions of food, medical supplies and safety of the people of Jammu and Kashmir. The unfulfillment of any of these provisions is a clear violation of the Geneva Conventions of international law, and an inhumane act perceived as an act of war.

The writer works at the Islamabad Policy Research Institute