Have we entered a new Cold War between the US and China, as suggested, if not reinforced, by the tit-for-tat shut down of their respective consulates in Houston in the US and Chengdu in China?

It is not so much the closure, which is bad enough, but the acrimony and mutual accusation of spying that accompanied it. In other words, this might just be the beginning of an escalating process that has been happening over a number of years, particularly after Xi Jinping became China’s President for life in 2013.

Before that China was following Deng Xiaoping’s dictum, which created the post-Mao order that emphasized quiet achievement while biding China’s time. It served China well with emphasis on building an economy under tight political control of the Communist Party of China (CPC). To emphasize that China was not going the ‘free wheeling’ way of Western democracies, Deng had no hesitation to crush the country’s democracy movement, led by students, by using military force in May 1989, which came to be known as the Tiananmen massacre.

It is believed that Beijing is not only seeking to create a China-centric world, but also circumventing and/or turning existing international institutions to China’s advantage

It created a backlash in the West but Deng stood his ground and, after a short hiatus, China continued to build its economic strength combined with modernization of its armed forces. It was during this period that China started loudly proclaiming its sovereign claims over island chains in the South China Sea, also disputed by other regional countries.

The suppression of the country’s democracy movement by the army in 1989 clearly demonstrated that, even though China was, by and large, free of ideological blinkers when it came to economic growth, its ruling Communist regime was totally committed to political control of the country. In other words, if the West was hoping, as many did, that a relatively well-off China will opt for democracy, that hope received a setback, though the hope still lingered on and seemed cemented, even though briefly, after President Bush’s ‘war on terror’. 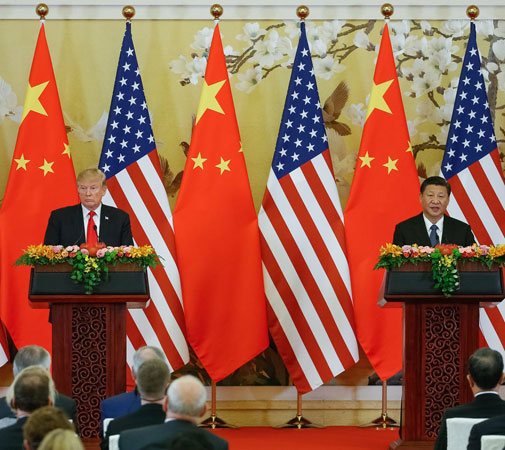 China itself was haunted by the separatist/autonomy movement in Xinjiang from its majority Muslim Uighur population and sought to make it into a terrorist issue. It succeeded initially but, as we know now, this has become a major humanitarian/political issue between the US and and China, which is accused of putting nearly one million Uighurs and other Muslim minorities of the region in virtual internment camps for their ‘re-education’ and integration.

This is one of a number of issues that have piled up between the US and its allies, particularly the Five Eyes countries (the US, the UK, Canada, Australia and New Zealand) that feel that China is threatening the rule-based international order through a well-coordinated aggressive strategy. Trump highlighted it during his 2016 presidential campaign by accusing China of trade advantage through currency manipulation and destroying US manufacturing jobs.

Following his election as president, Trump went on a trade offensive by putting up tariffs on Chinese goods. China did likewise in a tit-for-tat situation, but nothing much has come out of this in any meaningful way. It is now part of a larger strategic competition, with the US believing that China is angling for world domination; one of its most outward signals being an ambitious One Belt, One Road project with Beijing as the centre of the world. Another is to become a technology super power.

It is believed that Beijing is not only seeking to create a China-centric world, but also circumventing and/or turning existing international institutions to China’s advantage. For instance, China now has majority support in some of these international organizations, with a number of developing countries beholden to China for economic and political support. No wonder the US decided to quit the WHO whose director-general is accused of doing China’s bidding.

Other issues have come up, such as China’s new national security law to clamp up ongoing protests in Hong Kong against assertion and extension of China’s sovereignty against the spirit of the agreement between China and the United Kingdom to maintain Hong Kong’s autonomy for 50 years. And as earlier pointed out, the treatment of Uighurs in Xinjiang to erase their ethnic and religious identity has also become a serious issue of human rights violation.

Over and above, despite the rival sovereignty claims of regional countries to island chains in the South China Sea, China has managed to consistently and persistently create a fait accompli of almost all of the South China Sea becoming China’s internal waterways. The US has sent naval patrols through these waters to assert the freedom of navigation through international waters, but it has failed to seriously challenge the de facto control by China of the South China Sea.

It would appear that the US has decided to precisely do that. The US Secretary of State Mike Pompeo has reportedly warned that the “old paradigm of blind engagement” with China had failed and the world was host to a battle between the “free world” and “new tyranny”. How this strategic confrontation will play out is anybody’s guess, but it has the hallmarks of things getting out of control in a game of brinkmanship, even more so with the US presidential election only months away.