* Bilawal says PM has given 'NROs' to Indian spy, Indian pilot, terrorist Ehsanullah Ehsan and all individuals involved in mega corruption in country
* Kh Asif says Pakistan's honour is being compromised for a RAW agent 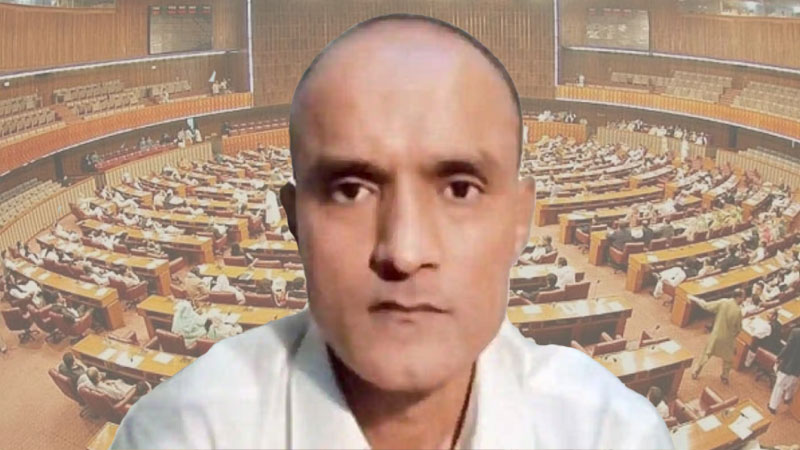 Major opposition parties in National Assembly on Thursday strongly protested and opposed the government’s move to table an ordinance pertaining to granting foreign citizens, who have been convicted in Pakistan, an opportunity to file a review appeal.

First the issue was raised by PML-N leader Khawaja Asif and later by PPP Chairman Bilawal Bhutto Zardari, who stated that Prime Minister Imran Khan had said that he would not give NRO to anyone but he has now given NROs to Indian spy Kulbhushan Jhadav, Indian pilot, terrorist Ehsanullah Ehsan and all the individuals involved in mega corruption in the country. “Government brought the ordinance facilitating Indian spy Kulbhushan Jhadav in May this year but kept it hidden from political parties, legislators and the people of Pakistan. Why this PTI government wants to give NRO to an Indian spy who has confessed to terrorism in Pakistan,” he asked. “Before this, the Indian pilot who attacked Pakistan was released after being offered a cup of tea,” he added.

Bilawal said that Imran Khan has given NRO to the biggest terrorist – Ehsanullah Ehsan – who was released from custody and allowed to flee the country. He asked that under whose custody was Ehsanullah Ehsan when he escaped? “When did he escape, how did he escape and what efforts the government has done to bring him back,” he asked.

Bilawal said that Imran Khan gave NRO to Jahangir Tareen and others involved in sugar crisis, Peshawar BRT, Malam Jabba and billion tree projects, wheat and fuel scandals and all other corrupt in the country. He demanded that a new institution for across-the-board accountability of all including judges and generals be set up, since every Pakistani is equal before the State. “We will not let this session continue which wants to give NRO to Kulbhushan Jadhav,” he said.

The opposition staged a walkout from the National Assembly after Bilawal Bhutto-Zardari pointed out the quorum. Later the session was adjourned.

Earlier, PML-N leader Khawaja Asif said Pakistan’s honour is being compromised for an Indian spy. He said his party was criticized in the past due to the Indian spy, however, the incumbent government has made Jadhav its ‘blue-eyed’ and is also opening trade with India. “Kulbhushan Jadhav is a convict who committed acts of terrorism in Pakistan. Why is he being favoured now? Prime Minister Imran Khan should tell why Pakistan’s dignity is being compromised? Who is Modi’s friend now?” he asked. “Kulbhushan Jadhav is Pakistan’s enemy and has confessed to his crimes. This ordinance is not acceptable. The government is taking international pressure,” he added.

Responding to Khawaja Asif, Federal Minister for Human Rights Dr Shireen Mazari said the former government decided to go to the International Court of Justice (ICJ). “The PML-N wrote a letter to the ICJ and created this problem for us,” she maintained. “From the first day, we had said that it was wrong of the then government [to go to ICJ] and it was not just our party’s stance, it was the PPP’s as well,” she said.

She pointed out that PPP and PTI – both of which were in opposition of the move- had raised objections over the then government’s decision to contest the case as “there was no reason to do so”. “If one country does not accept the ICJ’s [jurisdiction], the case is not heard,” she told the House.

Meanwhile, Minister for Information and Broadcasting Shibli Faraz said that 50% outstanding payments of the media for Pakistan Tehreek-e-Insaf (PTI) government’s two-year tenure have been cleared. The remaining dues will be cleared in a week’s time as Prime Minister Imran Khan has given special directions on this matter, he said, adding that the outstanding amount of the last two years was Rs 1.15 billion rupees.

Minister of State for Parliamentary Affairs Ali Muhammad Khan told the Lower House that the Senate has recently passed a constitutional amendment, enhancing the seats of Balochistan Assembly. He said the opposition parties should support the amendment when it is laid before the House for approval.