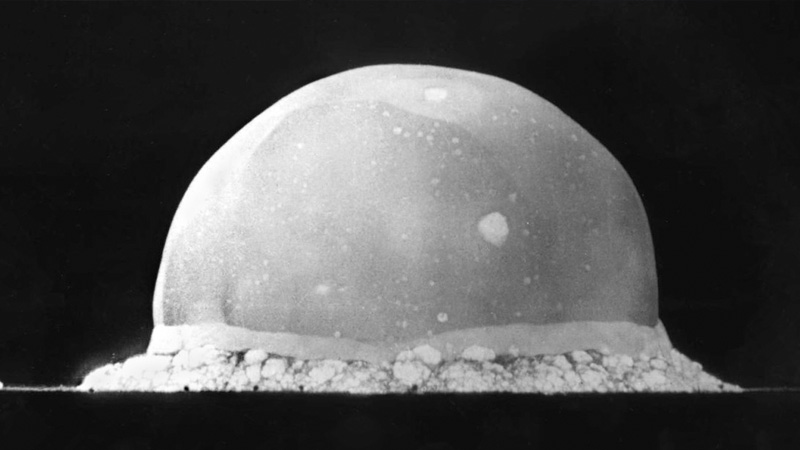 July 16 marks the 75th anniversary of the first detonation of an atomic bomb. Now famous as the Trinity Test, the giant explosion was the culmination of the ultra-secret Manhattan project and would within weeks lead to the end of the Second World War and usher in the Atomic Age.

On July 16, 1945, at 5:29 AM, the predawn darkness on what was then the United States Army Air Force (USAAF) Alamogordo Bombing and Gunnery Range in the Jornada del Muerto desert about 35 miles southeast of Socorro, New Mexico, was suddenly lit up with the light of a thousand suns. As a collection of the world’s leading scientists looked on from a safe distance, an ordinary-looking steel tower vanished in a fraction of a second as the world’s first plutonium bomb instantaneously converted matter into energy.

That day was the sharp end of three years of hard work carried out in a boomtown that is now the Los Alamos National Laboratory. Back then it had a population of 6,000 living in a collection of mud streets and hastily erected wooden buildings with just five bathtubs, and it was the center of the Manhattan project – the highly secret Allied effort to build the atomic bomb.

It began life originally as a British weapons project, but with the British Isles under constant German bomber attack, and every factory turned over to cranking out conventional weapons, it was decided to pool Britain’s efforts with America’s, resulting in the Manhattan project coming to life in June 1942.

Today, weapon development is highly evolutionary, building on the work that has been done by others going back decades, if not centuries, but the Manhattan project was about as close to starting from scratch as one can imagine. When the project began under the leadership of Brigadier General Leslie R. Groves and physicist J. Robert Oppenheimer, they were working almost entirely on theoretical work and a few laboratory experiments. To give an idea of how far they had to go, in those days, there was only enough plutonium in the world to cover the head of a pin – nowhere near enough to build a bomb, even if they were sure it could be done.

Fast forward to 1945 and the physicists and engineers at Los Alamos had produced two prototype nuclear devices. One was a simple design that worked by an explosive charge in a tube that slammed two plugs of uranium-235 together, resulting in a critical mass that set off a chain reaction as the uranium atoms burst apart, spewing out neutrons that split more uranium atoms in a cascade of destruction.

The uranium bomb was so simple that the scientists didn’t feel it necessary to test it, but the second bomb, called the Gadget, was much more sophisticated. The Gadget used the man-made radioactive element plutonium instead of uranium. Instead of a simple tube, the plutonium was formed into a near-solid sphere surrounded by explosives, a web of detonators, and acoustic lenses to make sure the resulting explosive wave imploded the plutonium sphere correctly to start the chain reaction.

Some sort of test would be needed to make certain that the plutonium bomb, which was subsequently used against the Japanese city of Nagasaki, would work. At first, the idea was to do a low-power explosion, but Oppenheimer opted for a full-scale test, which was code-named “Trinity.” By May, a 100-foot tall steel tower was set up at the Alamogordo site along with a base for 160 people, which swelled to 450 on the day of the test. Because of the high level of secrecy, the US Army accidentally bombed the area twice. Like a Hollywood spectacle where the big scene means destroying the set, the test could only be done once.