When the chips are down, EU leaders get fries 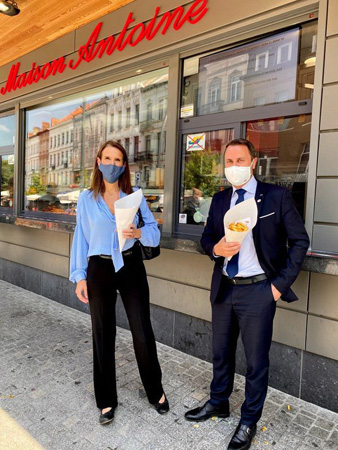 As European leaders haggled in Brussels on Saturday over billions of euros to prop up their coronavirus-blighted economies, four prime ministers slipped away in search of comfort food: a paper cone of Belgian fries. The snack that Americans call “French fries” – and Britons call “chips” – are such a staple dish in Belgium that roadside shacks and trailers selling “frites” were allowed to stay open during this spring’s lockdown to curb the spread of COVID-19. Belgian Prime Minister Sophie Wilmes tweeted a photograph of herself and Luxembourg Prime Minister Xavier Bettel outside the famous Maison Antoine “friterie” clutching their booty; she had “Andalouse” sauce with her fries and Bettel chose “Samurai”. They were joined by the prime ministers of Estonia and Malta, and all four sat together outside the restaurant in the Place Jourdan, which has also served German Chancellor Angela Merkel during breaks in previous European Union summits. Belgium has sought to have “Belgian fries” and the culture around them recognised as a distinct part of global heritage, alongside its beer-making tradition.