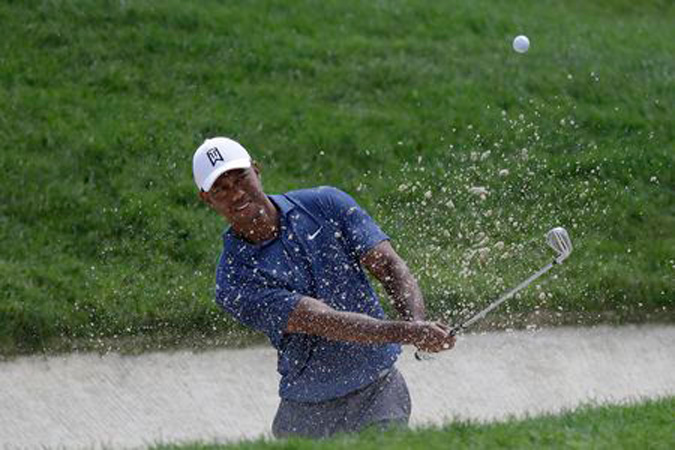 DUBLIN: Tony Finau and Ryan Palmer overcame slow starts to share the lead at the halfway point of the Memorial Tournament in Ohio on Friday while Tiger Woods narrowly made the cut thanks to a seven-foot par putt on his final hole of the day. Starting on the back nine, overnight leader Finau struggled out of the gate with bogeys on two of his first three holes. But momentum shifted his direction when he saved par with a greenside bunker shot out of an awkward stance on the par-three fourth that rolled within inches of the hole.

He went on to birdie three of his final five holes and sits atop the leaderboard with Palmer at nine-under-par 135 heading into the weekend. “I was very pleased to finish that way,” said the 30-year-old Finau, who is looking to capture an elusive second win after claiming victory at the Puerto Rico Open in 2016. “At the end of the day, still at the top of the leaderboard. Pretty satisfied.” His countryman Palmer suffered his first bogey of the tournament on his second hole but went error-free the rest of the way to card a 68 under sunny skies at the Muirfield Village Golf Club.

Woods, competing on the tour this week for the first time in five months, made two late birdies to salvage a four-over-par 76 that left him three over on the week. The cut line settled at three over, giving the 44-year-old a chance to win a record-breaking 83rd tour title this weekend. “Well, not very good,” Woods said, when asked to assess his round. “I three-putted two holes early and, whatever kind of momentum I was going to create, I stifled that early and fought it the rest of the day.”

Woods added that his range of motion was limited on Friday by his surgically repaired back. World number four Dustin Johnson struggled mightily on Friday, posting his second consecutive round of 80 for an unsightly 16-over par for the tournament after winning the Travelers Championship in his last start last month. Bryson DeChambeau’s second-round 76 included a quintuple-bogey 10 on the par-five 15th as he joined Johnson, Rickie Fowler and Justin Rose in missing the cut.