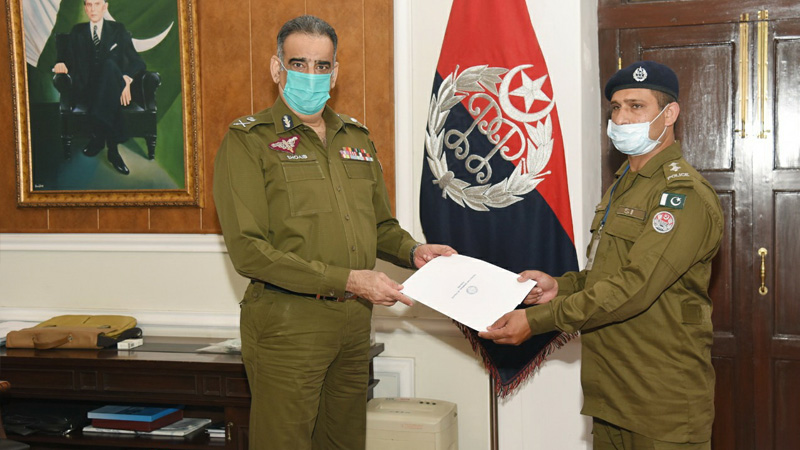 Inspector General of Police Punjab Shoaib Dastgir said that completion of PhD degree during police service is a unique aspect of honour and Sub-Inspector Dr. Muhammad Irfan of Punjab Police Lahore has enhanced respect and prestige of department and all force by acquiring this degree. He said that PhD degree of Muhammad Irfan in difficult subject of Chemistry from historical Educational Institution, Government College University Lahore reflects hard work and intelligence of force that officers and officials of Punjab Police are not less than anyone with respect to abilities and capabilities. He further added that sub inspector Dr Muhammad Irfan acquired higher education along with keeping his duties first and performed his duties with diligence which reveals his professionalism, zeal for knowledge and full hard work. These views were expressed by him when he paid homage to sub inspector Dr Muhammad Irfan during meeting at central police office Lahore today. IG Punjab awarded Dr Muhammad Irfan with cash prize and ceremonial certificate for his remarkable feat.

Dr. Muhammad Irfan expressed thanks for encouragement and cash prize by IG Punjab and said that my spirit and commitment has been increased by encouragement from Chief of the department and my responsibilities have also been enhanced with it because increase in educational status, creative and thinking skills get increased therefore, I Will work with more hard work and commitment by rendering my knowledge, abilities and skills for protection of wealth and lives of people and for provision of justice and service delivery to the citizens. IG further said that intelligent and capable officers and officials like Dr Muhammad Irfan are prideful asset for police department and steps shall also be taken for their encouragement in future. It is here worth mentioning that sub inspector Dr Muhammad Irfan has acquired PhD degree in chemistry from Government College University Lahore and currently serving as Incharge Investigation at Wahdat colony Lahore police.