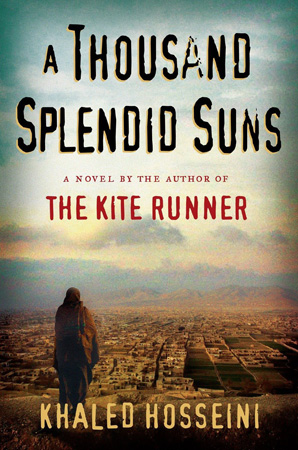 Khaled Hosseini, Afghan-American author follows his debut with fine risk-taking novel about two victimised but courageous Afghan women. He followed up his bestselling with another searing epic of Afghanistan in turmoil. The story covers three decades of anti-Soviet jihad, civil war and Taliban.

The author writes a clear, vigorous prose. Characters grow and plots develop with the variability of life, chapter to chapter. This may seem obvious, but many novels lack such spine to hold them together. Episodes are brief but powerful, adaptable to the ‘pick up, put down ‘pace of readers’ lives. Hosseini is capable of what critics call ‘edgy’ Writing. This used to be thought of as not being afraid to take a chance. The result is that the reader is never sure what will happen next. Hosseini has the capacious heart and soul of an optimist, but the eye of a realist. He is not ashamed to know and show compassion. Publishers love the result, a page-turner.

The story centres around Mariam, an illegitimate child of Jalil, a local businessman of the town Herat. From her mother to everyone she knows constantly reminds her of the fact that she wasn’t supposed to be born, she was a mistake. Mariam doesn’t understand this and in her childhood she dreams of going to school. Over the years all Mariam seeks, is to be accepted and be appreciated. She never learns to stand up for herself or fight for her freedom.

Another major character in the story is Laila, her father was a modern man. He encourages her to get an education and always stand up for herself. He calls Laila the kind of woman Afghanistan will need, because she is brave and kind. Laila’s story explores a lot of taboos such as premarital sex and indifference towards the girl child in the family.

The story centres around Mariam, an illegitimate child of Jalil, a local businessman of the town Herat. From her mother to everyone she knows constantly reminds her of the fact that she wasn’t supposed to be born, she was a mistake

What’s truly amazing about Hosseini’s writing is the depiction of the war and its effects through these characters. The story describes the state of Afghanistan when soviets invaded the country, when Babrak Karmal formed a puppet government and how the Taliban took control of the country. All these events are precisely described in the form of fictional story. It has both; the drama a reader needs, along with some truth to them. This is what truly makes it a page turner.

“Yet love can move people to act in unexpected ways and move them to overcome the most daunting obstacles with startling heroism.”

The book explores Laila and Mariam’s relationship and their courage to stay strong in an unfair world. It sends out the message that even when life seems unkind, love and compassion can do miracles. And when we make a sacrifice for love, it doesn’t really feel like a sacrifice, it feels like a choice… a decision.

A Thousand Splendid Suns is indeed a splendid read. Filled with strong emotions and a stimulating plot, it is one of my favourite books.

The writer is a freelancer and a Journalist. He can be reached at [email protected]