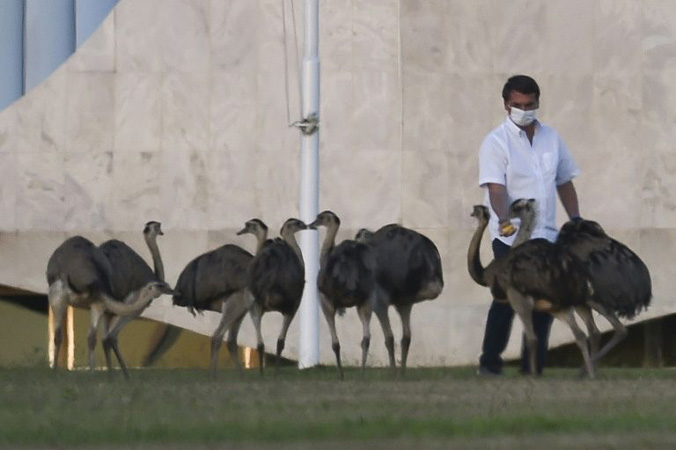 Brazilian President Jair Bolsonaro, who has been in quarantine nearly a week after testing positive for the new coronavirus, announced Monday he plans to take another test as he “can’t stand” being in isolation.

The result of the test, which is scheduled for Tuesday, “should be out in a few hours, and I will wait quite anxiously because I can’t stand this routine of staying at home. It’s horrible,” Bolsonaro said in a telephone interview with CNN Brazil, from his official residence at the Alvorada Palace in Brasilia.

Since the beginning of the crisis, the far-right president has dismissed the seriousness of the epidemic and criticized containment measures ordered by governors in Brazilian states.

During his interview, Bolsonaro said that he feels “very well” and has no fever or problems breathing. He also has not lost his sense of taste, one of the most common symptoms of COVID-19.

“Tomorrow, I don’t know if the new test will confirm (the virus), but if everything is fine, I’ll go back to work. Of course, if it’s the other way around, I’ll wait a few more days,” said the 65-year-old, adding he hoped to resume his activities within a week at most.

“Otherwise everything is fine. We are working by videoconference all the time and we are doing our best not to let things accumulate,” he said.

Brazil is the second-worst hit country in the world, after the United States. As of Monday, 72,833 people had died out of 1.8 million confirmed cases.

During his weekly Facebook Live post last Thursday, Bolsonaro said that after feeling unwell, he had started taking one hydroxychloroquine tablet every day.

The drug, originally tested to fight malaria, has been pushed as a treatment for COVID-19 in many countries — but its effectiveness has not been formally proven and the issue is deeply dividing the global scientific community.

“I took (hydroxychloroquine) and it worked, and I’m fine, thank God. And let those who criticize it at least offer an alternative,” he said during the Facebook Live.