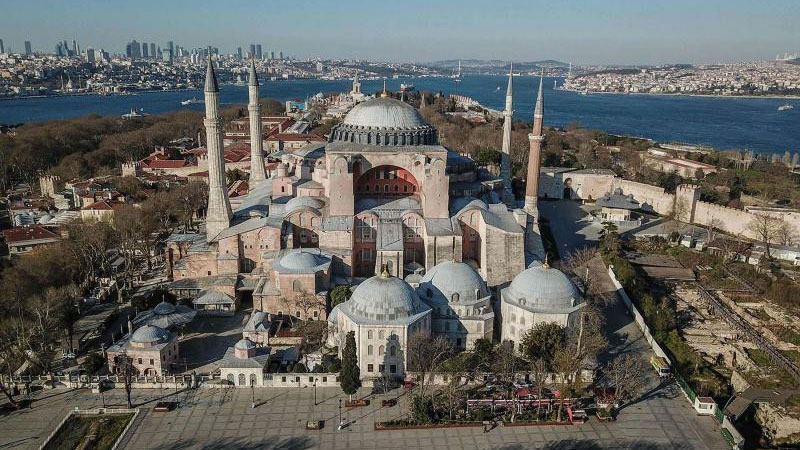 The Hagia Sophia has been at the heart of a centuries-old ideological and political battle between the Ottoman Empire and the Byzantine empire. Being a symbol of Christendom after its establishment by Byzantine emperor Justinian I in the 16th century, to being a symbol of Islam after the conquest of Constantinople by Fatih Sultan Mehmed II, the clash is still relevant in the 21st century.

The Council of State, the highest administrative court in the Republic of Turkey, has unanimously abolished Atatürk’s cabinet decision to turn the Hagia Sophia into a Museum in 1935. This decision is making headlines across the globe. The majority don’t know about the background of the issues. That’s why the majority in the media is presenting it as a religious issue rather than a political one. As it was not just a religious centre as presented by many, especially by those who are being influenced by Western historians. In 1204, during the fourth crusaders, it was converted into a Roman Catholic cathedral under the Latin Empire. The Hagia Sophia was severely damaged during this period. Historically, the Greek Orthodox was the official religion of the Byzantines. That’s why, it was considered as a religious centre but it was the place where emperors were crowned, which again backs the argument that it was the political centre rather than just a religious centre. The decision of converting the church into a mosque by Sultan Mehmet II had political and cultural implications for decades to come. But Sultan offered it as Islamic heritage and asked to keep it as a mosque. “May the curse of Allah, the angels and all human beings be upon anyone who changes even one of the conditions governing this foundation!” says the Hagia Sophia Foundation Charter.

The court judgment clearly states that “properties of charitable foundations cannot be transferred under any circumstances.”

The same is the case with Al-Aqsa Mosque in Jerusalem, Babri Masjid in India, and many other historical sites, which are running under Auqaf. This is not something new. The former Central mosque of Cordoba, Spain, despite being a world heritage site, is an active place of worship by the Catholic Church and now called “Cathedral of Cordoba.” But that does not affect the secular ideology of Spain. But having said this, now let us critically view this new crisis and discuss the political implications of this move without riding the bandwagon.

This battle for Hagia Sophia started when in 2017 when “Free Agia Sophia Council” was established in the US. This lobbying for the return of the status of an “Orthodox church” to Hagia Sophia was so powerful that it even managed to organise US congress hearings on this issue. This is not a pro-active move but a reactive move by the Turkish society. Foreign interference, especially from Greece and the US, turned this into an issue of national sovereignty rather than domestic politics. This is one of the reasons why even secular parties are rallying behind Erdogan when it comes to Aya Sofia. According to a recent “Areda Survey,” 73 per cent Aya Sofiakish citizens are in favour of transforming Istanbul’s Hagia Sophia into a place for Muslim worship and prayer,” which means its not just about Erdogan vision. Turks view the world from a different lens. Majority of the Turks across the globe take pride in the legacy of the Ottoman empire. This helps Erdogan in successfully gaining enough support to pursue both his domestic and foreign policies.

The rebirth of Knight templars, Islamophobia and anti-ottoman symbolism in terror attacks pushed a more conservative narrative within Turkey

For years, Erdogan remained silent on this topic but lifted the rhetoric in 2019, wherein one of his addresses, he publically called that he planned the conversion in response to US President Donald Trump’s recognition of Israel’s move to make Jerusalem its capital. A move that ended the whole idea of two-state solutions. Similarly, Erdogan made a public statement after Greece raised concerns about this move.

Even though this has nothing to do directly with Greece-Turkey or US-Turkey’s relations, it’s a loud and clear message by Erdogan to all of his critics. Starting from US-campaign to covert Aya Sofia into Church, failure to support Turkey against Russia in Libya and Syria, the US support for Kurds, lack of collaboration by the US on 2016 coup by F Gullen to EU’s delay on Turkish membership to EU migrant issues. Similarly, EU’s backing of Greece and Cyprus, while criticising Turkey for its drilling plans. Moreover Cyprus, Greece, and Israel’s pipeline plan to transport eastern Mediterranean gas into Europe (Turkey’s deal with GNA Tripoli can have consequences for this plan of Israel, Greece, and Cyprus), Russian opposition to Erdogan’s plans in Syria and Libya. Interestingly, these are all those countries who are criticising this decision on Aya Sofia. But if we analyse Erdogan’s political approach (what many western political analysts regard as Neo-Ottomanism or Neo-Osmanism) in the context of the clash of civilisation, it is more popular now, especially after recent attacks on mosques in New Zealand and Australia. The rebirth of Knight templars, Islamophobia and anti-ottoman symbolism in those attacks pushed more conservative narrative within Turkey regardless of the fact how Western media views Erdogan’s Neo-Ottoman world view. This Islamophobia and Ottomanphobia only helped Erdogan regain his losing political support. But whatever implications this is going to have for world geopolitics, for Europe’s relations with the Muslim world and particularly with Turkey. One thing is for sure the more world powers push Erdogan to the corner, the more it helps him in building his image in Turkey–as a strong nationalist, who stands for sovereignty of Turkey and in the Muslim world–as a Great Muslim leader, who stands for the rights of Muslims.

The writer is a freelance journalist. He is an independent Geo-Political Analyst, commentator, and keen observer of International relations